The final stage of the street light story unfolded today, in less than 10 minutes. A crane lorry arrived. 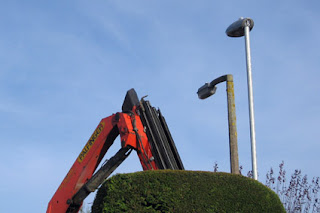 A chain was attached to the concrete lamp post to steady it. The workmen then cut through the base – lots of sparks! 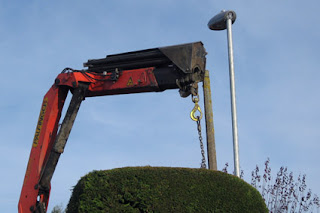 The crane took the strain and began to lift. 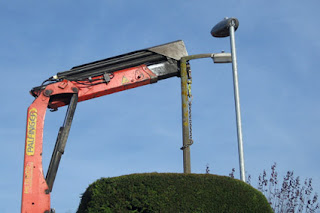 It began to swing around and was then lowered onto the back of the lorry. 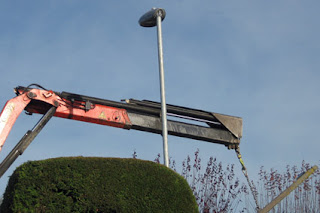 At last, a clear view of the new lamp post, which it has to be said, is far brighter than the old one – lights the front room up well if you need to come into it during the night for anything. 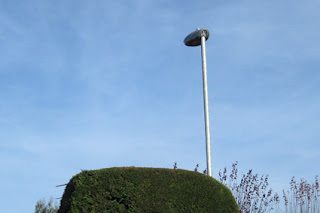 We still don't yet know if our new lights will be switched off after midnight or not.
The basket that I made yesterday has spent the night under weights and bricks and has flattened down well. It has now lost its slight wobble.
The bread I made the other day with some soya flour in it tastes fine. We both had slight indigestion not long after eating it but as it wasn't as well cooked inside as normal, we feel this is the cause rather than the soya flour. Will toast some today to see if we get the same problem. No walk today, hope to go tomorrow if B. if fit as she is quite wheezy with asthma.
Posted by Dc at 11:01