Our normal Wednesday walk is postponed until tomorrow. I was going to get some washing done and out to dry but we keep having showers. Although the temperature outside is 9.5 Celsius, there is a brisk cold wind blowing – a day for indoors then.

Abigail, over at http://keepingitsimplythrifty.blogspot.com/
was asking for tips on bread making. There are hundreds of ways to make bread and even a seasoned bread maker will on occasions have a loaf that for some reason or the other, doesn't work out right. I wouldn't use 100% wholemeal flour as for us, it makes too dense a loaf.
Here is how I do it. Excuse the stains on my bowl, they are a permanent reminder from when I baked rhubarb in it – they won't go away!

This amount makes 2 x 2lb loaves of bread OR you can divide it in half BEFORE adding the salt and make one loaf of bread and a sweet loaf. I'll explain when I get to that stage. I sometimes use only half the recommended amount of yeast. It takes longer to rise and gives a slightly different texture but still produces good bread.
Into a large mixing bowl, put 2lb of white bread flour, 4oz of any other kind (granary, wholemeal, rye, cornmeal etc). 2 x 7g sachets of any easy blend yeast, I just happened to have this one on this occasion. 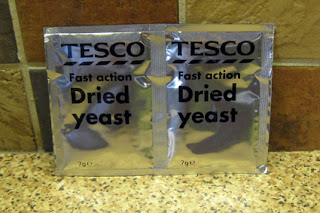 2 teaspoons sugar and 2-3 teaspoons salt in a small container. (I use a brown egg cup to remind me I haven't yet used it). If you are going to make bread and a sweet loaf, use only half this amount of salt. 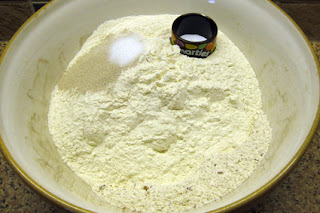 I always used to add my salt at the start but after watching The Baker Boys make bread, they reckon it inhibits the yeast, so I now add it later. DO NOT FORGET IT!!!

Mix all the dry ingredients, except the salt, together. 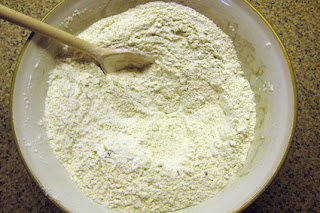 Then add 600 ml warm but not hot water plus 2 tablespoons oil into it and mix well. Depending on what flours you have used, you many need to add possibly another 50 - 100 ml. When adding extra, do it gradually as you want the mix to be slightly sticky but not so wet you can't get it off your hands. 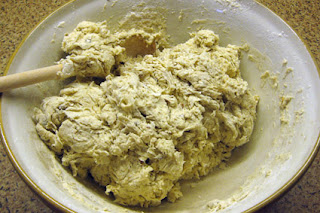 Bring it all together in the bowl before tipping out onto a lightly floured surface. Flour your hands and bring it into a ball shape ready to begin kneading. There are all sorts of timings associated with kneading but I count as I find it more consistent.
Holding the back of the ball with the palm of one hand, push the other hand away, pressing down and away on the dough as you go. I am left handed, do it the other way if you are right handed. This will elongate the ball of dough and show you the inside of the mixture. 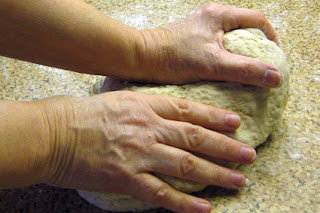 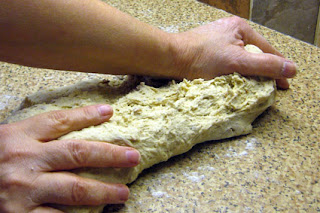 Using this same hand, roll it back up towards you (like rolling plasticine), back into the start position. 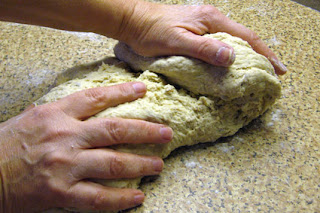 This whole push/pull action counts as one movement. I now do this 100 times, rotating the dough and alternating hands so as I don't get arm/wrist ache.
IMPORTANT – If you are dividing your dough do so now. Keep one half to one side and use the other one as shown below.
When you have done this, lift the bread portion of dough up and sprinkle the salt onto the work surface. 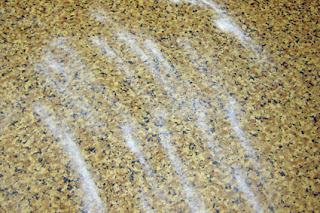 Begin the process again, another 100 times. At first it will be very gritty and start to feel slightly sweaty – carry on. Make sure you incorporate all the salt. After 100 lots of kneading, it will be ready. Lightly oil the bowl and put the dough in. Either oil some cling film and cover the bowl or place a tea towel over it. 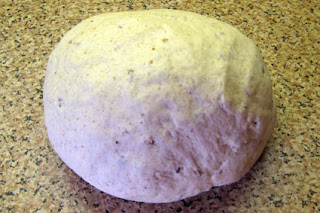 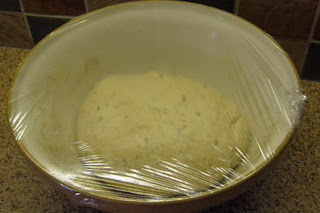 I usually then put the bowl either into the airing cupboard or a sunny room but not in direct sunlight. This 'rising to double the size stage' can take anywhere between 1 and 2 hours. Today it took 1 hour in the airing cupboard.
This whole process so far has taken 25 minutes - including stopping to take photographs. That is from beginning measuring to putting it in the airing cupboard. It should take you no more than 10 -15 minutes though.
IF YOU HAVE DIVIDED YOUR DOUGH – roll/stretch it out the best you can. Sprinkle sugar, cinnamon (optional), dried fruit etc onto it, then roll it back up. Repeat then form back into a dough, cover and rest like the bread. I can't give amounts here, it is a matter of trial and error. On average, a total of 2oz of sugar, 2oz of fruit and a teaspoon cinnamon should suffice. Experiment!
Once the dough has risen, lightly flour your hands and punch the centre of the dough a few times to knock it back. 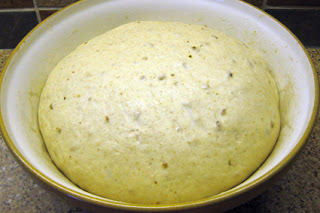 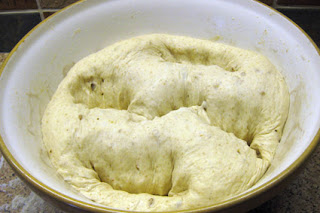 Tip onto a work surface and lightly shape it back into an elongated ball. Grease then flour your tin, place the dough in, cover with a tea towel and leave to rise until it is slightly above the tin - roughly another hour or so. 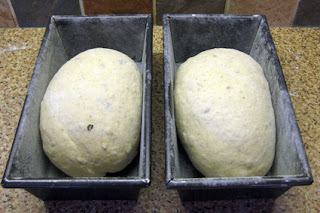 Do the same for the fruit loaf if using.
When baking, I used to just bung it in and it was pot luck if it turned out right. Now I add steam.
When the bread is almost ready to bake, put the oven on to 220 Celsius and put in a small metal container as the same time to heat up. (I only have a pot one so I put the water in this before I put it into the oven. That way, it is almost steaming by the time the oven is up to heat). 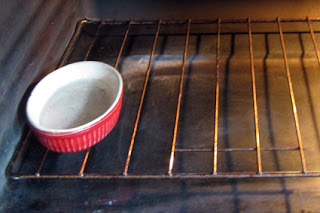 When the oven is ready, slash the top of your bread (helps it to rise) you can add toppings here if you wish. 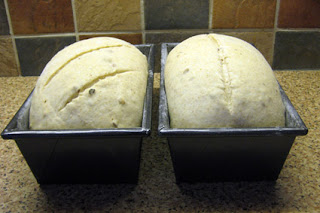 Pour water into the metal container CAREFULLY, then put the bread tin/tins in. For my oven, I find 25 minutes at this temperature is good. You may need to do yours for slightly longer.
When the time is up, take out your loaf tin, tip out the loaf and tap its bottom. If it sound hollow it is done. If not, give it another 5 minutes before trying again.
Put on a cooling rack to cool. 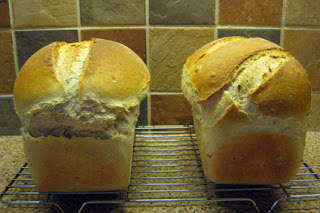 If you want a softer crust, wrap it in the tea towel to cool. Phew!!
This bread making tutorial by Sue over at is also very good.

Whilst all this was going on I made our lunch using the last of the unused tin of corned beef. We will be finishing the other half of the corned beef and potato pie with some baked beans tonight. Not bad eh, 6 meals from one tin. 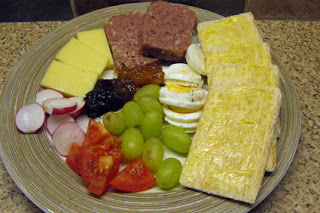