Yesterday saw us making some granola using the recipe courtesy of The Quince Tree:http://thequincetree65.blogspot.co.uk/search?q=granola

Into a mixing bowl we added the jumbo oats, sunflower and pumpkin seeds. 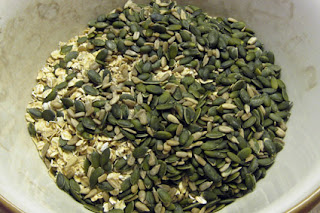 Next came the desiccated coconut, chopped mixed nuts, salt and cinnamon. Next time around we will try desiccated sliced coconut as we felt the original requirement made the end result a little 'bitty'. 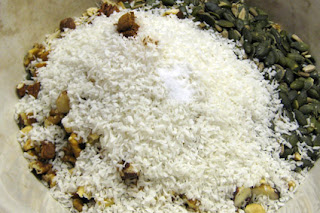 These ingredients were given a good mix together before adding the sunflower oil and soft brown sugar - you could have used melted butter/honey/maple syrup here! 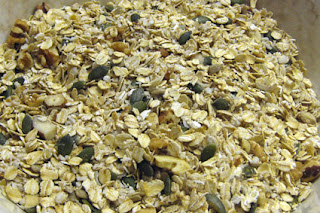 Then they were mixed together again. 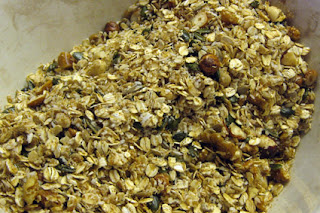 The mix was then divided between two baking sheets and baked in the oven for a total of 1 hour, stirred every 20 minutes. I forgot to set the timer for the last bit but did take note of when it should have finished.
So it may be slightly more brown than it should have been but tastes very good before trying it with milk. 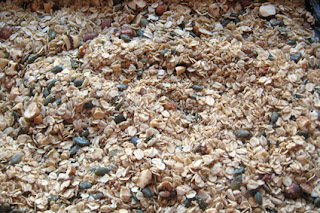 I then decanted it onto trays to cool off. The final amount of dried fruit was added and mixed in well ( in our case dried cranberries and sultanas). 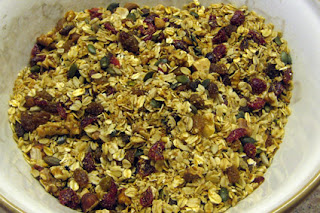 It was then put into an airtight container.

This is not a cheap option but we were getting rather fed up with the sawdust dry stuff that we were buying from a reputable company. I think it could have less fruit and nuts in it to reduce the cost if needed. Anyway, we only eat cereal on a Saturday morning so this should last a month for us two.
Posted by Dc at 12:21