The recent snap of cooler weather has seen me, like Dan, in the kitchen making things. It not only keeps me warm but is usually very productive.

We found a small container at the back of the freezer and after opening and sniffing, decided it contained quite old loganberries.

They were thawed, put in the bottom of a dish with some sugar and topped with sponge. The slightly pink tone happened when I added the thawed loganberry juice to the sponge! 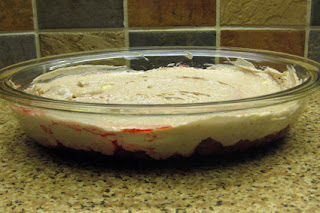 I forgot to take an 'after' photograph, but it was very nice over two days with evaporated milk, then custard. It came out a mucky brown colour due to the addition of berry juice but the flavour was unaffected.

Piccalilli came next. I have many recipes for this but last year tried the one entitled Pam's Piccalilli courtesy of this page: Pams Piccalilli

I did amend it this year by adding slightly more honey (60g rather than 50g) and next year it will be amended again to reduce the turmeric to 7g and increase the mustard powder to get it a slightly lighter colour. Overall though, it is nice tasting and all the vegetables have a lovely crunch.

Here are the vegetables being steeped in salt overnight. I used green tomatoes, radish, carrots, green beans and pepper, courgette, cauliflower and celery. 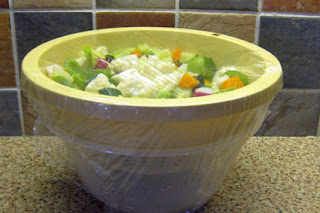 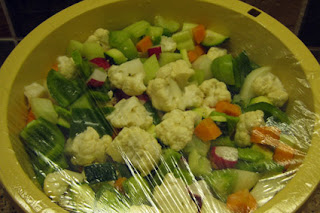 All my other recipes call for the vegetables to be boiled in the sauce for anywhere between 10 and 15 minutes. This one doesn't.

However, I always worry about botulism or some such thing, especially when it is being given as a gift. With that in mind, this year instead of boiling the sauce on its own for 4-5 minutes, I added the vegetables to the sauce for this length of time. 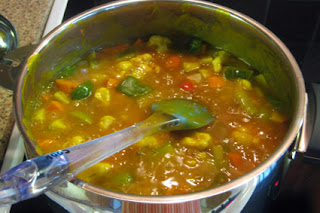 I had washed and sterilized the jars in the oven,  and managed to make 5 medium sized jars from her recipe. I just need to label them before storing for 6 weeks. After that, it will be ready to eat. 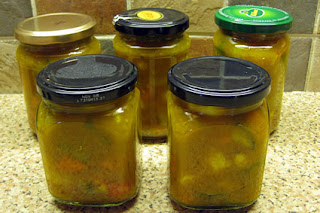