First of all, welcome to my new followers, Angela, Sooze and Frugal Queen, glad to have you on board!

It seems my current postings have raised quite a response - dialogue on issues is always important so on that vein, here is my next part.

The title from the previous post needs an ending and it is 'chicken wings'. This is something I would not have been able to do on war rations when we had to live on them for more than 6 years! During war time, factories were not churning out bits of chicken (or even chicken at all), so to stay true to our cause at that time, it was a whole chicken or nothing! That chicken had to last us a whole week on rations, as it took up the entire meat ration, for 3 people for a week.

From a monetary point of view though, a whole chicken would also work well and give even more meals.

Anyway, I digress. How many meals/snacks can you get from chicken wings? I had a good think about this and began. I reckon there can be two possible starts to this trial. Roast them before use, or after. I chose the later because the meat would be softer to remove from the bone.

Even though roasted wings would make a lovely meal, you would then have to boil the chewed on bones to progress...

I used 16 wings and put them into a saucepan, along with 1 carrot, 1/2 an onion, a couple of bay leaves and some peppercorns. They were just covered with water and simmered until cooked (around 40 minutes). 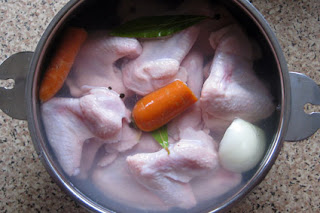 The liquid was strained - I stand my colander in the grill pan so as not to lose any. 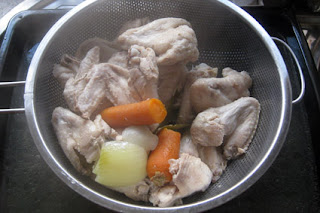 When the wings were cool enough to handle, I stripped the meat from them and kept the discard pile. I managed to get 10 oz chicken, not bad. 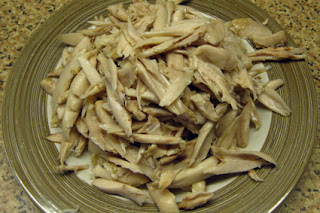 More importantly I got 1 litre of primary stock. 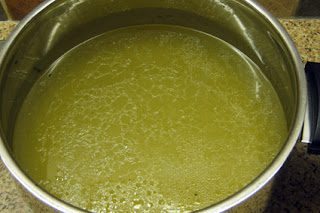 The bones, skin etc were put into a greased paper lined tin 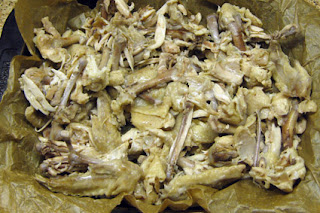 and roasted in the oven to get them brown. They were then tipped back into the stock and brought to the boil, then left to go cold. The liquid was strained again and the rubbish thrown out.

I left this to go cold overnight, enabling me to lift off the fat and rinse to remove any gelatine or debris. This can be kept in the fridge, for roasting potatoes if you wish (a war time tip!). You can also do this with any meat juice gravy, if left in the fridge to go cold.

Now, on with the chicken.

Taking inspiration from Nigel Slater on Friday night, I decided to make a suet crust pastry pie filled with 1/3 of the chicken (only added at end when pie crust was ready), 2 sliced leeks, 2 rashers chopped bacon and a handful of frozen mushrooms.

These were fried to soften and slightly brown, then 1/2 pint chicken stock (made from 1/2 a cube as I'm saving my stock for something else..) plus 1/4 pint milk and a good 1/2 teaspoon dried tarragon and wholegrain mustard. It was thickened very well, then strained. I wanted to put the filling in the pastry case reasonably dry, with the chicken mixed in, then spoon over enough stock to moisten it without making it soggy during baking. No soggy bottoms here hopefully. 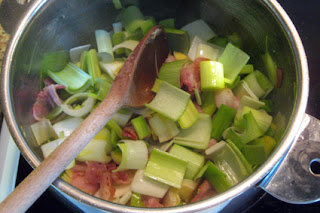 I used 8 oz of self raising flour plus 4 oz light suet, black pepper but no salt as the stock is quite salty from the cube and bacon. Enough cold water was added to bind it together. Some of this was saved for a lid but the rest was rolled out to line a shallow dish. The filling was added (plus a little thickened stock) and the pastry top. 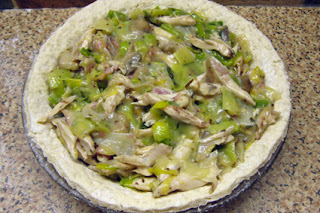 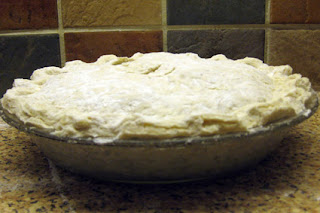 It was baked at 200 Celsius for 45 minutes until golden. 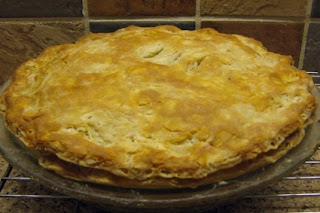 There was a little pastry left over so I made 4 jam and oat tarts. 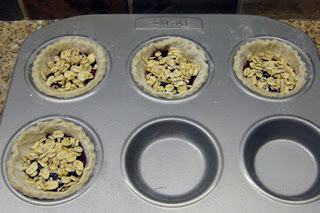 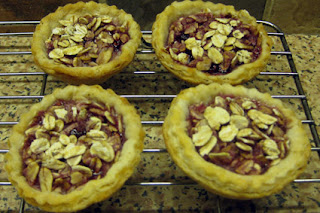 Now we could be pigs and eat half the pie each but chose to use 1/4 each with home grown carrots, runner beans and the left over stock as gravy.  The remainder will be eaten Monday. 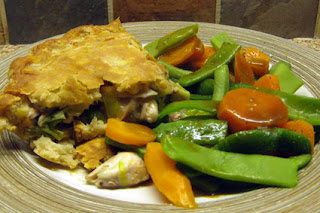 I am not very good at working out the cost as far as cooking goes but the ingredient price for this pie using the cheapest ingredients (to serve 4) and the 4 jam tarts, was £1.80 - the leeks were home grown and the jam home made. I still have 2/3rds of the chicken left to use. Later in the evening, we had the jam tarts with 1/2 a pint of custard - 20p.

I plan on using 1/2 the remaining chicken for tea tonight and the other 1/2 for a snack on Monday lunch. As for the stock...