'Make it up as you go' baking kind of day!

Welcome to my new follower Carol.

Today has been predominantly sunny with a blue sky. The wind is blowing hard and outside in it, it is cold despite a temperature of 7-8 Celsius!

We've had a quick walk round the block, fed some pets of a friend whilst she is away, and both done some ironing though DB more than me. He has hopefully fixed the leak in the bath (will check it out tomorrow) and is currently sat doing family history on his laptop.

I've been busy in the kitchen. Made us some leek and potato soup for lunch. Then after it had digested and we had rested, off I went back in their again. This time making enough pastry to make 6 individual savoury pies (in one of those deep extra large muffin tins).

DS. & FDiL. gave us some game breasts last winter and we have defrosted them, plus a chicken breast, and other things to make these mini pies.

First of all the tins were greased, floured and lined with pastry. 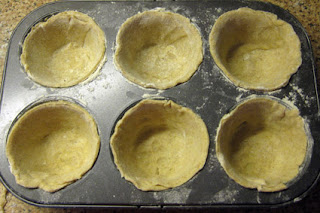 Then some diced, floured and seasoned chicken breast went in the bottom of each one. 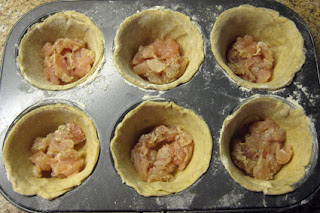 Followed by a layer of sage and onion stuffing. 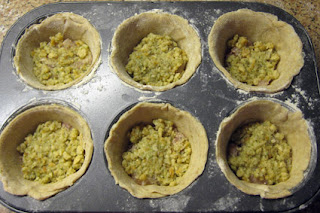 It was followed by the diced, floured, seasoned pheasant breast (at least I think it was pheasant, the package had P on it, but didn't look big enough for partridge or dark enough for pigeon). 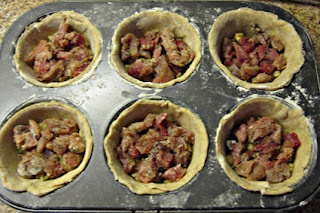 It was followed by some sliced cooking apple and more seasoning. 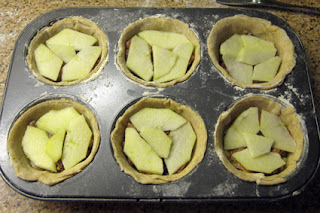 Then one of my sausage rounds (honey and mustard). 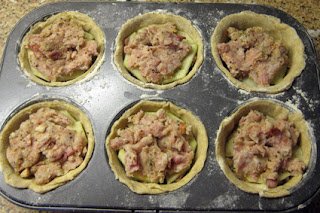 I've taken the risk of not adding any extra fluid, sauce or gravy (didn't have any anyway), as I'm hoping the sausage and apple will leach out some tasty fluids of their own which should seep down to the other meat. Time will tell!

There was enough pastry left over to use the other sausage round, divided up into 8 small pie ties, a slice of apple and pastry star was added.

The other 4 had mince-meat filling plus a star. Hopefully, the sausage ones won't overflow as they cook otherwise these 4 could end up savoury mince pies! 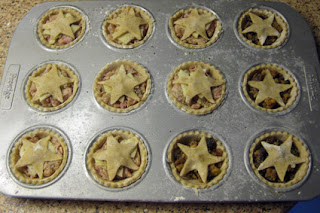 Here they are fresh from the oven - oops... some one has eaten 2 mince pies! 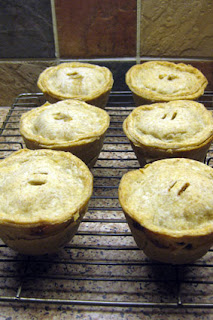 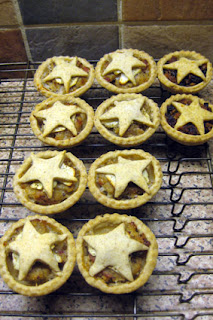 We had one each of the mini game pies for tea with vegetables and onion grave. The other 4 will be frozen. 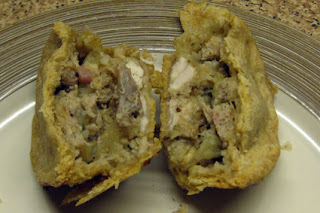 We finished off the last 2 mince pies with some custard. Yum Yum!
Posted by Dc at 17:22