We are slowly getting back into the swing of everyday life things.

First thing was to make some bread. I have had to throw away the two loaf tins I normally use as their lining was coming off and sticking to the bread. That is a bit naughty as we got them in the sale for £8 each, when normally they would be £16. Both of us thought they would have lasted longer than they did.

Anyhow, not to be outdone by shoddy workmanship, and after the bread was made and I needed tins, I rummaged in the back of a cupboard and found my original two. These were bought second hand in a yard sale.

They are slightly shorter but deeper than the others and the amount of bread I make didn't quite fit in so I also made 4 baps with the remainder.

Here they are on their second prove, soon to be covered with a tea towel: 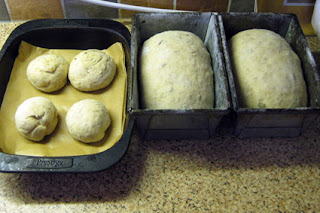 Fresh out of the oven. They have had sunflower, pumpkin and linseeds added, plus oat bran and wheat germ: 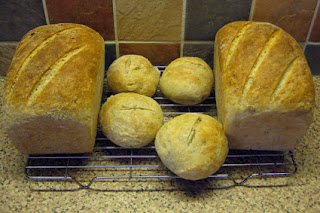 Whilst I was initially making the bread, DB was wrapped up against the pouring rain, harvesting our small crop of beetroot as it was beginning to go to seed. I donned plastic gloves and peeled all of them for DB to make a triple batch of Indian Beetroot Soup to freeze for winter. 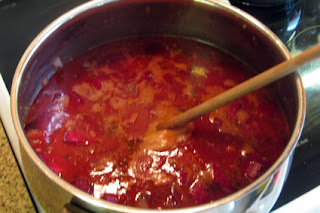 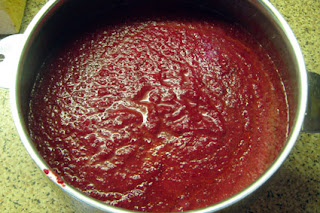 It will now be frozen into 3 x 2 man portions. The rest of the cooked beetroot was put into a jar with flavoured vinegar to have over the next few days.

Once that little lot was over, I cut DB's hair as it was too long and making his shirt collars grubby! After cutting J's hair at the weekend and cutting 3 strips 1/2 a size too short (the rest at normal length actually blended in), I then managed to cut DB's hair too short at the back.

Bless him, he looks like he is about to go off to school. Luckily for me, he doesn't really care as he says, if he can't see it, it doesn't bother him.