Sorting out the raised beds

Welcome to my new followers Tollyterrier and Janina, glad you could join me.

After being inundated with lettuce, an awful lot of which went to seed, I fed it to the compost bin. Not a waste really as it will help to give us some nice compost for next year.

The mange tout peas died a death in the heatwave and went horrible, so they, along with all the broad bean plants were pulled out of raised bed 4. I decided to remove just under half of the bone dry soil/compost - didn't have any more buckets to take the rest. 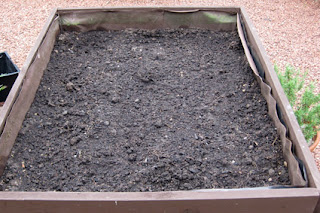 A whole bag of John Innes No. 3 was added. I am hoping this won't dry out so much. It was dug deeply into the old soil and then the whole thing given 2 buckets of water and left to drain. After doing so, I checked again and yep, you guessed it, after a couple of inches, it was bone dry, so the soil was turned again and more water given. This time it was wet all the way down. 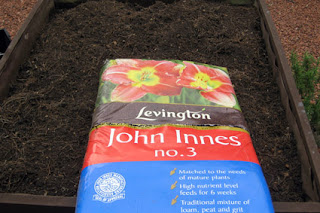 Finally, the other half of the dry soil and another bag of John Innes was added, dug in deeply and more water chucked on. Oh, forgot to mention that each layer also had a small handful of blood, fish and bone dug in.

I left it to settle overnight, patted it down lightly and sowed one line of a type of lettuce called Moroccan Cress. Every 4 or 5 days I am going to sow another line of different lettuce until the bed is done. That way, I hope to keep in lettuce for many weeks without being overwhelmed. It was then covered with fleece to stop the birds looking for worms. 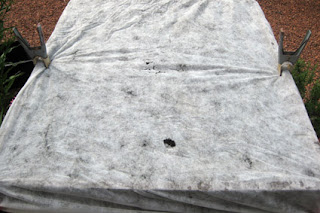 Raised bed 2 also had some dying growth removed and one row of Boltardy Beetroot was sown. I'm hoping to sow every few days to fill the bed back up. I know beetroot takes a long time but the packet does say sow until July.

Bed 3 also had some dead growth removed and I plan to rake it finely and sow some carrots. Might well be getting late but I'm going to risk it anyway.

I think I must look out for some more hardy lettuce type things or stir fry greens to sow for later in the year.
Posted by Dc at 12:42