So far so good on the storm. We have lots of rain and again, the back garden is under a few inches of water. So far though, no nasty gusts!

I had previously made faggots using one of the three on Frugal Queens site. Today, we made this one of hers here

Our ingredients were slightly different as I didn't quite have enough of one things. So here is what we did: 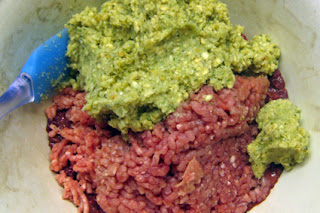 Mix all the above together. You really will need to get yours hands dirty! When we do this stage again, we shall cover and leave overnight to 'harden' the mixture a little. 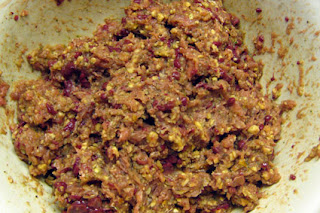 Test the flavour by frying a small spoonful in a little oil. Doing this enables you to adjust seasoning and flavouring so you know you will love to eat them.

Using an ice cream scoop, we placed 'balls' of the mixture onto a greased deep pan and baked them at 200C for 30 minutes. Whilst they were roasting, we made a large pan of gravy.

5 medium onions were sliced and fried. Quite a few baby tomatoes were added and softened. Flour with pepper and paprika and dried sage were added, then it was topped up with 4 pints boiled water plus enough stock cubes (3 in our case), to get the flavour correct. We also added 3 tablespoons tomato purée.

When the first tray had cooked for 30 minutes,  1/4 of the gravy was added and the tray put back into the oven for another 20 minutes. 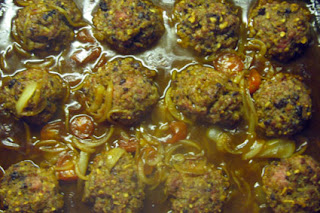 Once done, the tray was removed and another 1/4 of the gravy added and the tray left to go cold.

The other half of the faggots were cooked in the same way. Once both lots were cold, they were bagged up with some gravy and frozen. We had 2 each that night with some potatoes and carrots.

All in (and remember, we were 1/2lb short in liver to make this), we managed to get 21 faggots, plus the gravy for £5.80. Maybe not the cheapest but the best to date and we shall definitely make this version again. We had gone off the strong liver taste of the first version we tried and felt the chicken livers greatly improved the flavour.

What would we change? The sage and onion stuffing. We really like Paxo and I'm afraid own brand just does not do it for us. Other than that, absolutely nothing.