Yesterday was our first really cold morning at 2C  but we still didn't have the heating on. We did however, burn a few logs in the wood-burner in the evening. It was colder inside the house than outside.

I could have sworn I had seen on several blogs, the recipes for Sage & Onion stuffing/sausage loaf but couldn't find them when I needed to, so made up my own.

All on-line versions had minced pork added to them which I didn't have/want. Anyhow, this is what I did:

1 packet of Sage and Onion stuffing made up with 50ml less water than the instructions. 1oz strong cheddar - grated, 4 thick sausages and 1 beaten egg (think it would have been okay though without the egg).

Everything was mixed together, then patted into shape. OIL OR GREASEPROOL PAPER THE PAN! My mistake first time around, was in not put it on baking parchment or it needed to be oiled all over before putting into the pan! 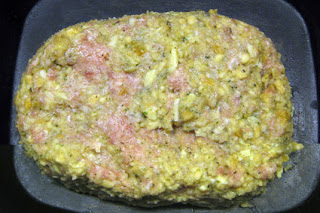 It was roasted in a 190C oven for one hour, along with some new (ish) potatoes. As you can imagine, I couldn't get it out of the pan in one piece but lesson learnt there though!

We served half of it with half of the roast potatoes, carrots and swede plus half the onion gravy. It was delicious.

Sorry about the photograph, for some reason, it downloaded into coloured bands:( 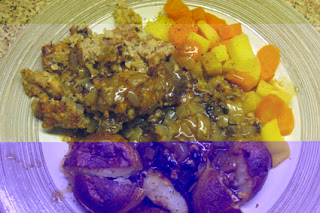 My second disappointment was knitting. I had started another hat for myself, having decided to make it on larger needles so it wouldn't flatten my hair so much.

The rib went very well. I had seen on Y--t---, how doing one row purl and the other knitting through the back of the loop, gave a twisted stocking stitch so thought I would give it a whirl. I also decided to knit it in two colours. I must have been mad, should have stuck with knitting in two different colours.

Somewhere along the line, I had dropped stitches without noticing. When I finally did, I pulled back to the mistake (first line above the rib), then no matter how hard I tried, just could not pick up the stitches and am afraid to say, had a paddy and threw it in the bin.

Naughty me, I could have unpicked the whole thing and begun again but didn't. So there you go, lessons to self:

1) line the tin when baking a stuffing and sausage roll.
2) try a new stitch or multiple colours but not BOTH!

You see, never too old to learn!!!