I had the other night. The fridge freezer started beeping as the super freeze button decided to keep switching itself on and off. Now if our DS is reading this, he will be smiling, as it last happened several years ago when he was at home, and also kept him awake!

DB of course could sleep through a hurricane so he slept soundly on after thinking he had fixed it around 12:30am. All was quiet, and for a second time, I was just about to drift off to sleep when it went off again - this time 02:35!

No point in waking him again so I moved into the front room. After being uncomfortable for half an hour or so (our new suite is not as good as the last one for sleeping on!), I went back to bed and put ear plugs in. I could still hear it but it was bearable.

We had to go on-line to find how to repair it as we had lost the previous instructions. A quick photograph to ensure everything would be put back correctly, DB started to clean the motherboard of its 'algae growth' and 'cat's whiskers' that slowly form on it over time. Hopefully now, it will shut up again for another few years. It is 13 years old so is doing well.

Nope! It has just started doing it again and as the day has worn on, gotten worse. Its even driving us nuts during the day!! After much debate, we have been out to buy another one. Once the motherboard starts doing it own thing, you are lost. Can't buy another one as they don't make them any more.

We have removed the wine rack as we don't need it and also changed the doors over so they open the other way. Three and a half hours after delivery, it was finally ready to switch on. The doors took nearly an hour to change over! So far, it seems very quiet.

One of the 'joys' of living a more simple life is whatever, if any, money we have left over at the end of the month, goes into a savings account and there was enough in there to get another one. Bought yesterday, getting delivered today. Boy, did it take us an age to get it through the house into the conservatory ready for taking away.

Can you remember the guest slippers I was knitting for when I pop round to some-one? Well they are now finished. They look small but actually stretch and fit very comfortably: 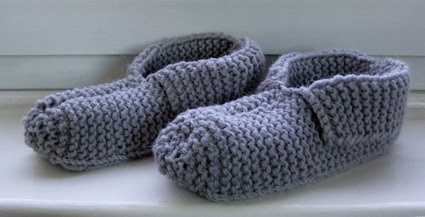 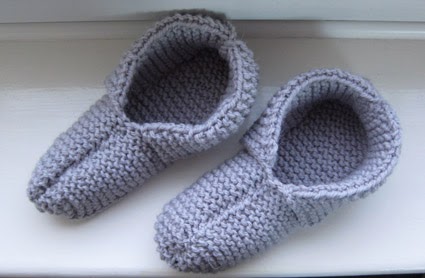 Welcome to my new followers, Flower Petal and Janet via Bloglovin and Mrs G. via here.

Email ThisBlogThis!Share to TwitterShare to FacebookShare to Pinterest
Labels: Make do and mend, Making