First of all, welcome to my two new followers - Robyn via Bloglovin and Chel via here!

A few people have posted recipes for meatballs but I quite like Froogs' version where she adds sausage meat to the mix! You can find her link here

Anyway, herewith my recipe - into a mixing bowl put 4 skinned sausages (I used Lincolnshire ones flavoured with sage), 3/4 lb minced pork, 1 minced or finely chopped onion and some sage and onion stuffing mixed up as follows. Place 4 level tablespoons of dry stuffing mix into a jug, top up with boiling water to the 1/2 pint mark (top up not add 1/2 pint!!) and mix. If it is very stiff add just a little more water to get it to a soft state - similar to the picture below: 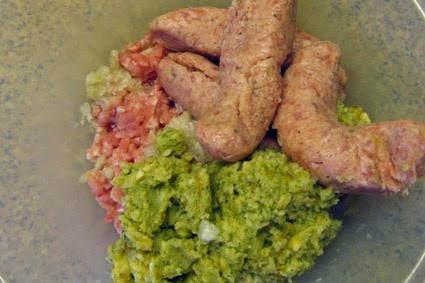 Mix everything together well. You need to get your hands into initially then when reasonably mixed, you can finish with a wooden spoon. I was aiming for a soft cake-like end result. Using a bare tablespoon of mix, form into meat balls, roll into flour and set aside until the mixture is used up. I could have made 22 but settled for 20 as the rest of the mixture was being used to create a hot sandwich for lunch!

Froog's chose to oven bake her version but I fried mine until browned on most sides. Towards the end, I added another diced onion, made some stock, added a good handful of our tomatoes that had been oven dried and frozen and cooked for around 50 minutes with a lid on. Once ready, the gravy was thickened and adjusted for taste.

We had 5 each for tea with delicious creamy mash and peas. The meatballs were soft textured and just melted in your mouth: 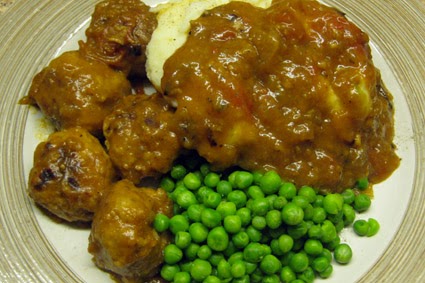 The other 10 were put into two foil trays with some of the gravy, then frozen for future meals. Cost wise, I'm not too sure as it depends on what price you pay for meat where you are. I only use meat from our butcher who displays where the meat has come from (usually local). For us, I estimate all in, including the mash and peas - £1.65 each.