It may now be February but I have finally got around to trying (being the operative word here), some appliqué. I wanted to trial rough edge (left) and needle turned versions (right) and here are my first attempts: 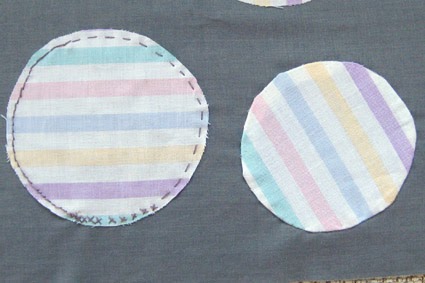 The rough edge version (at least it should be once washed to fray its edges), used two strands of embroidery thread (in three different stitch styles) and the turned version had a single strand of sewing machine thread. I struggled in the preparation but the sewing side seemed relatively easy. I think I prefer the right version the most.

I certainly found it difficult to turn it in situ so cut it free, and tacked around its edges. The template was put back in and the sides drawn up, before ironing it roughly into shape. I have no idea if that is how you are supposed to do it but it worked for me. There is a slight pull on the background material in places but I guess that would disappear once its backing and background stitching is in place?

The rough edge version on the left had a small 1/2" wide circle of bond-a-web ironed into place, 1/4" from the outer edge, very fiddly!