Having found some nice but thin duvet material and cut out the first circle, I thought it might not be able to cope with the strain and instead, found an old but nice pair of curtains. The label had gone so I had no idea if they were 100% cotton or something else.

I chose the pan to be used in the bag and decided to test drive the hot base of it, on the bottom cushion pad, before proceeding to stuff it and finish sewing. It worked fine.

Herewith all my circles cut out: 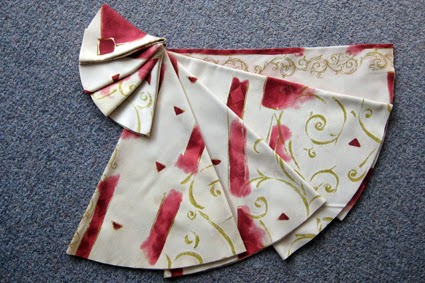 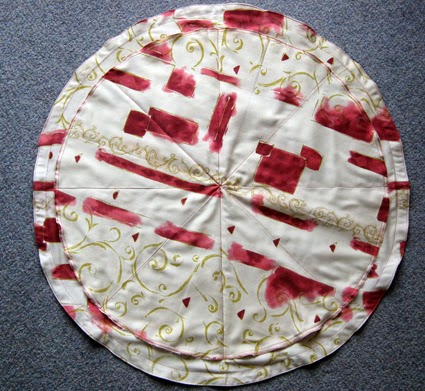 The main problem I found was that the material I chose, had a slight stretch to it down one side, something I omitted to find out before beginning - SO CHECK YOUR CHOSEN MATERIAL FIRST!

Also, both circles were not true circles (material again rather than Elaine's instructions), which caused me problems. Another area was that my inner circle for some strange reason, was a little too big, so had to be adapted, hence some zigzag over-sewing: 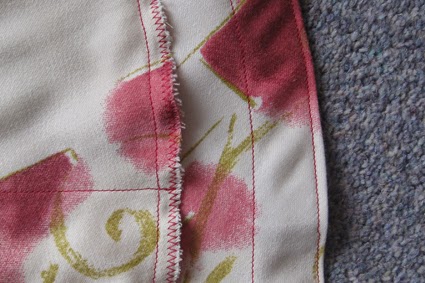 Just when I was getting going, I ran out of thread so had to wait until we next went to town:(
We did not have any polystyrene balls and as the point of this was to make it as cheap as possible (apart from paying for the pattern from Elaine), we opted to break up lots of packing polystyrene to fill it with, despite anticipating lots of mess and hair pulling moments. I wasn't wrong:(

Giving in, we ordered 2 cubic feet of flame retardant, mixed sized bean bag beads from here (had no idea how much we needed, half as it turned out!). If you order 1 cubic feet, that should be enough, depending on what size bag you make. More later!