I still can't seem to get the hang of growing my beetroot in batches, despite sowing at regular intervals. In the end, they all come up at the same time, must be my timing. Anyhow, harvested the lot the other day and boiled, then skinned them. We had several cold, splashed with vinegar, in sandwiches, the rest went into two large jars of beetroot. I used Rhonda's vinegar recipe from here: 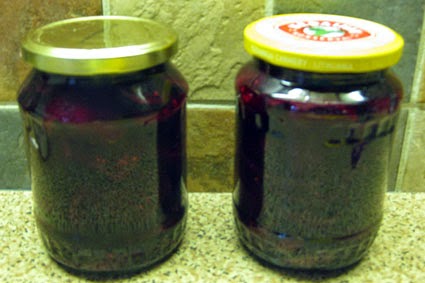 Despite the unusually warm weather for September here in the UK, Autumn is definitely here, as can be seen by my tomatoes in pots. The leaves are really mottled, some tomatoes have burst, the rest don't seem able to ripen naturally very well (other than the 1" cherry ones). Time to make some sweet chilli and tomato sauce: 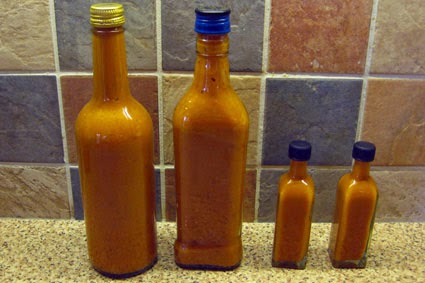 This is meant to be a thickish chutney but I finish it as soon as the tomatoes are mushy. It doesn't have a lot of vinegar in it so doesn't taste only half done but nice and smooth. That way it turns into a pouring sauce, similar in texture to tomato sauce. I'm hoping it will pour out of those tiny bottles as they are for a present for someone (who doesn't read this blog to my knowledge!). First get your bottles, I keep all my old glass vinegar, sauce, salad cream bottles for this. Wash and dry in an oven set to 80C/100C.

Herewith the recipe. The first half is the spice blend:

3 - 4 dried chilli - de-seeded if you don't want it too hot
1 tsp dried ginger
1 tsp turmeric
3 tsp cumin seeds
5 garlic cloves - crushed
1/4 pt vegetable oil - use only half of this in the blender!

Put all the above spices into a blender with half the oil and blend until reasonably smooth. Don't worry too much if the chilli doesn't blend down so well at this stage.

Prepare 2 lb of fresh tomatoes. Leave the skins on, take out the hard core bit and loosely chop. When done, heat the spice/oil blend in a preserving pan and cook out the spices. Add the rest of the oil, tomatoes, 4 oz white sugar, 1 tablespoon table salt, 1/4 pint nice vinegar and 2 - 3 tablespoons of tomato purée. Bring to a boil then turn down to a simmer. Cook until the tomatoes are mushy. REMEMBER, this is a sauce so don't treat it like a chutney and cook all the liquid away.

As soon as the tomatoes are soft, remove your bottles from the oven. Blend the whole amount with a stick blender. If you only have a normal blender, allow it too cool slightly before blending. Blend until smooth. Using a funnel or jug with a lip, pour into the slightly cooled bottles, filling right up to the top as it shrinks a little when cold. Put on the tops and leave to go cold before labelling.

We now normally leave it for at least one month before using and you will need to shake it well before using as it often separates out during storage. We had a little left over and used the base of it on a scone pizza for tea!