Welcome to Retireewannabe and Tania Osborne via Bloglovin and The Saver of Suburbia from here.

We are having problems with our trained pear trees. For the past few years one had brown, dying leaves. A professional gardening neighbour thought that although it looks like Fire-blight, the rest of the pear looked fine and suggested it was a bug problem such as pear leaf mite.

We have been treating it organically with a home made solution for a few years and this year, for the first time, most of its leaves were fine. However, as Autumn approaches it is going brown and speckly again! The treatment I made up consisted of pyrethrum powder with water, a few drops of liquid soap, some tea tree oil and some lavender oil and painted it on after stripping all the leaves off. It mega sulked for 2 years! As diseased ones appear, they are removed as soon as seen.

The trained pear tree, next to it, started sprouting white horns under a few leaves, this week. It apparently has become infected with Pear Trellis or Pear Juniper Rust see here

So far, I have only had to remove about 8 leaves. There is no proper organic cure for rust or the mites, so eventually, Imay have to use non-organic methods. Apparently I need to use something like Westland Fungus Attack on the Pear Trellis Rust as it has the correct chemical in it:(

In the rest of the garden, we have been busy tidying up for winter. The fruit cage roof has been rolled up out of the way so the birds can get in if they wish. All the Autumn raspberries have been dug up. Some were replanted into fresh compost in sunken containers, the rest given away. We were fed up dealing with the suckers.

My 28 leeks developed rust so I took rather drastic action. I pulled all the affected leaves off, then cut down their green shoots to just above the white bit. They had to take their chance. Here they are, a few weeks down the line: 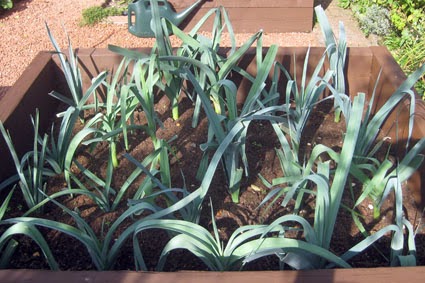 Not too bad. Some rust is still present but I'm not too worried now. The raised bed with the carrots in is doing fine. We had one row of purple ones but there is still 2 rows of orange and some more purple to go: 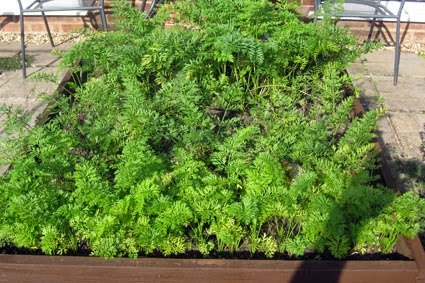