In the back garden

Again, this came on leaps and bounds whilst we were away. The rhubarb transplanted from the front where is wasn't doing very well has finally died after putting up a rather feeble fight. I think the crown was just exhausted so shall invest in another one. The autumn raspberries despite potting into sunken containers still seems sickly though some I gave away are doing well. Can't work it out as they are not in my soil and everything else (except the old rhubarb) is thriving. Ah well. 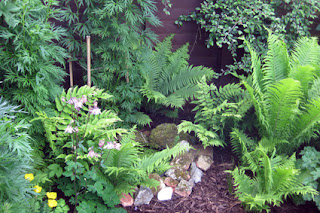 I love all the moss growing on the stones surrounding the bin - just lovely.

Two of our older apple trees grown along the fence have been fruitless for a few years. I gave them a good talking too and both have thrown out two small bunches of fruit. I'm hoping they stay on long enough for me to identify them. Once I think is either a James Grieve or a Coxs Orange Pippen. The other could be Fiesta or Sunset but the labels have long gone.

The Spartan tree planted 2 years ago has one small bunch on it so I hope they stay on as well but it might still be a little young.

Apples around the front artchway are doing well: 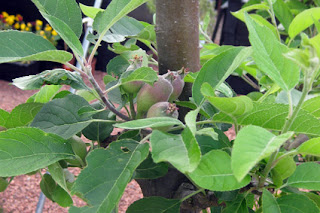 The red pear likewise - it is covered in fruit-lets for the moment: 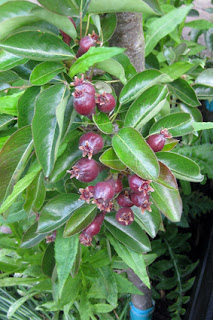 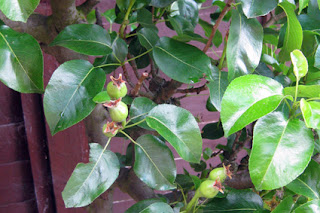 I obviously say at the moment for most things as the June drop will take quite a lot of these babies away then after that, I must make myself thin which I usually forget to do. The result of which is many small apples. I hate thinning after the June drop as the trees are so small it doesn't leave us much fruit.

Everything in the fruit cage is also doing well. The gooseberries are being inspected for sawfly each day, so far so good. The loganberry which was finally moved in there this Spring is full of flowers and the Bramble is also sending some out. The Blueberries look a little sorry for themselves as I pruned them last year as they were spreading over the path:(