Bits of this and that

I have really enjoyed watching Wimbledon this year, and put it down to so many of the British players getting further in than normal. I will be glued to it this afternoon despite a nurse's appointment during the match!

If Andy beats Roger I hope he then goes on to beat Novak. Not so much to win again but more to show he can beat Novak again. If karma thinks otherwise, I'd rather see him not go through and then I'll hope Roger beats Novak. Not got anything against Novak as such just that it gets a bit boring watching the same people win time and time again. Same goes for Serena!

My front garden is in its green phase, just about. I am waiting for cut back things to reflower as well as new things: 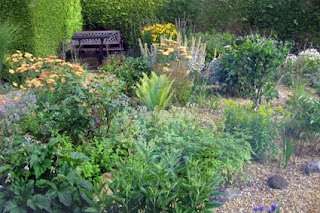 I baked two more loaves of bread as well: 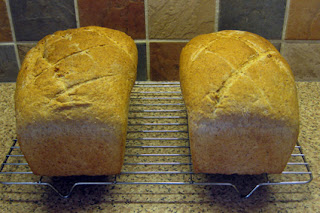 This time, they were a combination of wholemeal, white and rye. Last week during the hot and humid weather, they were sliced then bagged in half loaf batches to prevent them going mouldy before being finished. This week, not being quite so hot, we kept one sliced loaf out and froze the other as a whole sliced loaf as well.

We went out early to do our weekly shop. Last week, we managed to stretch it to 10 days. Might be able to do the same this week as we seem to be spending just a smidgen more each week than before. I can't work out whether it is because prices are rising, our salad crop has failed or we are eating differently to normal due to the weather chopping and changing so much.

Anyway, I hope the budget hasn't been too cruel to any of you. It will be good for most of us I think, when the rise in tax allowance kicks in. As for us, I think for the most part we will be okay but am not sure yet what the changes regarding car tax etc. will be in the future as something was mentioned about that but no-one knows what the changes are or so it seems.

Keep on keeping on folks. Have a lovely weekend.