In the UK we used to have 4 distinct seasons, now they are blurring into each other as the years go by. Our summer, if we are lucky, will generally arrive anywhere from late May until the end of September. That is probably 4 months at an absolute maximum. Again, some years we might only get 2 to 3 months of Summer.

Autumn can be dry but is now often wet, windy and cool. Occasionally, we get an 'Indian' summer, i.e. a few late weeks of warmth which usually throws us and our gardens into a tizz.

Winter follows on in much the same theme, sometimes we have snow, nowadays often none at all. When snow does fall, people seem to have forgotten how to deal with it. The rain still pours, the temperatures drop lower and the frost arrives. Generally it is cold, penetratingly so at times, especially when combined with the fierce winds and driving rain.

Spring arrives, often much later than it used to. Again, it is predominantly wet, windy and cool with skies at times, resembling those of Autumn. Some years, the only difference between Autumn and Spring are the colours of the leaves or the appearance of flowers!

As soon as summer arrives, we stock the wood-burner stores so the logs are completely dry when we need them. We order and stack logs (we don't have the facilities to gather logs by ourselves), we gather friends newspapers, collect pine cones to help fill kindling boxes, look around for and collect or put by wood suitable for kindling.

Our central heating is oil, living where we do the alternatives are all electric or bottled gas which are even more expensive. We use it sparingly, relying on the burner instead so it is our priority when stocking up.

Any exterior house problems are sorted out before winter, we grow what we can in the vegetable and fruit department, freezing or preserving where necessary. After that, kitchen cupboards are slowly stocked up with things such as pulses and lentils, flours, canned goods.

I suppose you could call it a pioneer mentality in a way and it is probably not called for nowadays. However I remember power cuts, lack of food and heat, being cut off from the snow so I prepare. I can't help myself, it is an inbuilt defensive mechanism to protect my family.

All the things above are now done or in the process of being done. I have even started on my winter felted slippers: 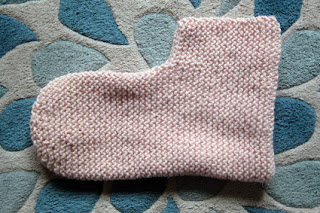 Above is one of my giant knitted bootee's, which when felted and still wet, will be moulded onto my foot to mould  them into shape - lovely! If you wish to knit some yourself, here is the link

Loads of bedding and unwanted cotton clothing has been gathered ready for quilting. We just need to create some wooden blocks to go underneath the dining room table, which will raise it up to save our backs when cutting out. Then I can begin.

Boring it might be to some of you, exciting it is for me. Each to their own:)

Email ThisBlogThis!Share to TwitterShare to FacebookShare to Pinterest
Labels: Weather