The cake from hell...

It was one of those days when if anything could go wrong, it did. I really should have known better than attempting to cook a cake!

There was I thinking I would have another go at the Nigel Slater Gooseberry Crumble cake but without the crumble. I had a new tin, 7" instead of 8", that'll be alright thought I - doomed, doomed, we're all doomed!

Anyhow, I read the first part of the recipe, completely forgetting that last time I made it, I had noticed an error and corrected it but not altered my incorrect recipe:( and put the first lot of ingredients in my mixer. Meanwhile I got on with lining my tin.

Nope, the parchment paper had a life of its own, the scissors wouldn't cut correctly, despite slightly greasing the tin and crumpling the paper, it just would not go in properly.

I chose this inopportune moment to glance at the sloshing noise in my mixer. It should have been quiet, pale and fluffy. Oh dear, I had put the eggs in with the butter and sugar!

Off I went in a huff, scissors thrown across the kitchen, audibly my volume rose and my swearing set off the smoke alarm (metaphorically speaking).

DB very bravely came through so see if he could help - his answer was me continuing to have my hissy fit. Anyhow, braver still, he stood waiting until I had calmed down enough and with a breaking voice said what was going wrong. I HATE it when a cake nearly reduces me to tears, it is just ridiculous.

DB hasn't lined a tin for a long while but after a bit of instruction, fetched another pair of scissors and got on with it. As you can imagine, he had it done in no time.

I meanwhile, set about rescuing the cake mixture. There was no way it was going to work and for a short moment, I thought about throwing it out but hate wasting food. In the end I got all the ingredients and threw them in and let it get on with it. Nope, it mixed them in and it was still too wet (due no doubt to the fat and sugar not having been whipped to a light and fluffy stage).

In desperation I threw in more almonds, then more, and finally emptied my half packet in and added a spoonful of baking powder for good measure. That seemed to do the trick.

It went into the tin, was topped with gooseberries and baked for the required 1 hour. Wasn't anywhere near done and in the end it took an extra 30 minutes.

The outside is not as brown as it looks on the picture and as the gooseberries sank in some of the cake mixture rose up like a gooseberry volcanic eruption.

Anyhow, it tasted fine, but a little dry due to all the almonds and as usual, it can be eaten with custard. The next day, the moisture from the gooseberries had worked their magic and it was nice and moist: 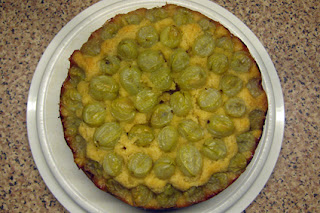 Now that you have finished laughing - stop reading:)
Posted by Dc at 10:15