Having read numerous sites on gluten free bread making, most were dire in their early experiments. Often reporting 'best learn to bake other things before tackling bread'.

Although I have planned on buying the requested GF bread, having flour leftover from other GF baking, thought I would give bread making a go. Although I used a recipe off a web site, they had linked back to the original which is here

Go down to Champion Sandwich bread for the original recipe - which I had to adapt as I didn't have everything needed! However, if you decide you want to make up the Brown Rice flour blend from scratch, here in the UK some changes are needed:

Here is my version for 1 loaf rather than 2. Make sure everything is room temperature:

2 level cups of GF Plain Flour (Asda in my case - no bean flour in it)
1/2 level tablespoon xanthan gum
1/2 level tablespoon ground linseed steeped in 1 tablespoon boiling water
1 level teaspoon salt
1/4 level cup powdered milk
1 1/2 large beaten eggs (One egg was beaten then measured, it filled a 1/4 cup so half was used plus another whole egg)
1 dessertspoon of butter
1 teaspoon vinegar - not malt
1 dessertspoon of honey
1 slightly rounded teaspoon of instant - put in the flour kind of yeast as it was all I had
1 cup of warm water.


Grease a loaf tin.
Mix together in a bowl, the yeast, flour, xanthan gum, powdered milk and salt.
In an electric mixer bowl on low speed and using the paddle attachment, (you will need an electric mixer or very strong muscles to beat this enough!) mix together the vinegar, butter, honey and eggs for 30 seconds.

Add half the dry ingredients and mix until just blended.
Add the other half and mix for 30 seconds or until fully blended.
With the mixer turning still on low speed, gradually add the cup of warm water until used. Once fully blended in, increase the speed to medium and blend for another 4 minutes.
Your mix should look like a cake mix or very thick batter: 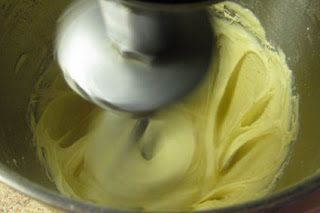 Scoop it all out into your loaf pan and with wet fingers, gently smooth the top: 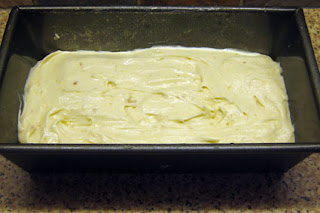 This next bit is where things didn't time out the same.

The recipe suggests leaving the mix for 50 to 60 minutes in a warm place. I covered mine with greased cling film and put it into the airing cupboard but after an hour, nothing had happened. If you have a proving drawer you are onto a winner here!

I don't so did it the hard way.

I put my small top oven onto its lowest setting, when the light went out, I switched it off, put in a bowl of boiling water on the bottom shelf, placed the bread on the top (making sure the oven did not feel too hot otherwise it would kill the yeast before it would have chance to get going) and draped a tea towel over the bread. A bit fiddly but it kind of creates a tent. I had to do this twice.

Once risen to just above the tin, remove from the oven carefully (treat it a bit like a souffle at this stage), turn the oven to 190C. When ready place your loaf pan in: 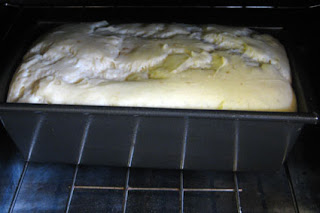 It says to cook the loaf for 50 to 60 minutes. Mine went brown after 20 minutes so I inserted the thermometer into it and it read 98C. I had misread the recipe which says when it reads 200 it is ready. Obviously they meant 200F rather than 200C. Eventually I got to 200F in about 30 minutes, by which time it was getting very brown.

I left it to cool in the tin and had a real struggle getting it out (I shall use my silicone pan next time). Eventually it came out and it was left to go cold: 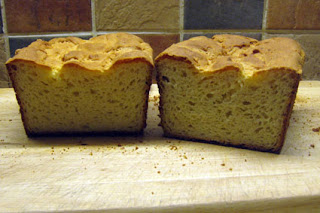 As you can see, not anywhere near as tall as a normal loaf and certainly nothing like the ones on the web site!


However we got around that slightly by trimming of the bottom and sides. It was cut in half then sliced along its longer side to give decent sized slices. We got 8 and the trimmings were made into breadcrumbs: 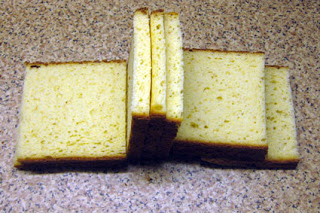 It is very springy, like normal bread. How did it taste? Well, we both had some of the trimmed top and were impressed. DB even remarked "I could happily eat that"

I can't really work out what it cost for those precious 8 slices - maybe around £1.30, but reckon with more practice (if I needed to), they would get taller and less brown so more slices, maybe 10 or 12 might be available.