I don't know about you but this time of the year, especially when the heating is not on too much, I find my airing cupboard not as hot as I need it to be, for proving bread.

I had read on-line somewhere about using a mini electric blanket, the small variety that sits behind your back, although I was a tad worried about it getting wet. DB came up with a much better idea, using the base of an electric propogater!

Once the bread was nearly ready to prove, I brought it into the kitchen and switched it on. Unfortunately, it doesn't have a lid, so once the bread was on, it was covered with cling film, then a tea towel to help retain its heat. It worked a treat: 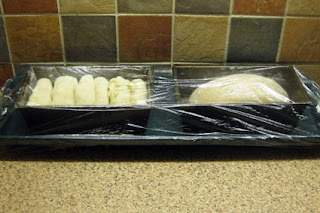 30 minutes later, lt was almost ready to go in the oven: 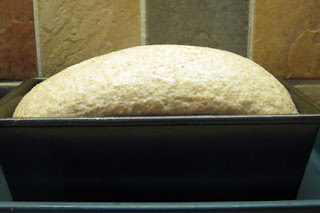 As we were watching tennis, I forgot to photograph it before slicing and freezing. We shall be using this method from now on methinks!

The loaf on the left was another gluten free loaf, came out like a brick, even the birds wouldn't eat it!
Posted by Dc at 08:15