Presents are all bought, as is the drink and extra food items. GF baking is almost but not quite finished - still got to tackle normal and GF pork pies!

We have so much fruit in the freezer, some from 2014, so decided to thaw some blackberries. They were cooked, pureed, sweetened until just the pleasant side of tart, then strained and pushed through a sieve to remove the pips - I hate pips in ice cream. We wanted 5 fl. oz for this particular ice cream, which was what we ended up with, so that was lucky!

We made our chosen ice cream base, have several that we use - stirred in the puree and froze: 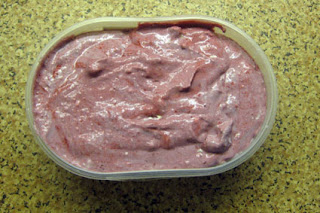 If you make a custard or yoghurt base, you probably need an ice cream maker, which we have. If you don't have one, you could try recipe that we sometime use. It is a no churn Mary Berry recipe from here.

We also made a different one, with Bailey's, but it is not quite so light in texture and some of the Bailey's has sunk to the bottom - which will be a nice surprise when we get down to it. The picture below looks different because we investigated it: 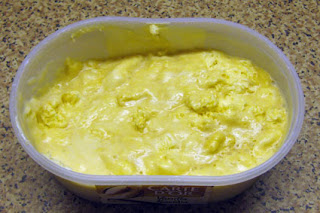