I have only really used round biscuit/scone cutters but fancied some square ones for a change. The first thing I made with them, using the second largest cutter, were a half batch of GF cheese scones: 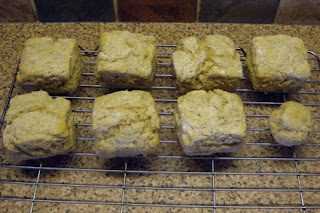 I think the largest one would work really well to create small, individual pizza's!

One of the GF food products I have been wanting to try to make is Yorkshire Puddings. I have had a few unsuccessful attempts from the myriad recipes online. However, using the recipe from my faviourite author The Gluten Free Alchemist, I have succeeded. Her recipe can be found here although we had more than enough mixture to make the 12 I wanted. Next time, I shall try either one third or two thirds of it depending on whether we want Yorkshire pudding and golden syrup for pudding:)

Here they are about halfway through cooking: 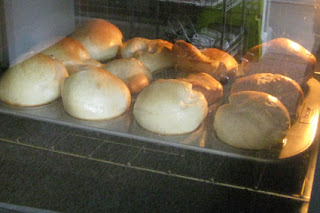 And fully cooked ready to serve: 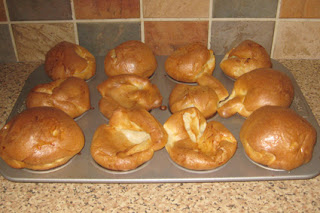 Aren't they beautiful? They tasted lovely. We had 3 each with our casserole followed by 3 each with syrup for pudding. The only problem I had was despite greasing the pan well, adding a good amount of fat into the base, getting it smoking hot etc, they completely stuck:( We got them out in the end though but have now bought a better pan to do them in!

My new River Cottage GF cookery book also has a recipe in it for these, so we shall try those next time and report back.