A little later than normal for me, the first stage of bread making was in the airing cupboard on its first rise (alarm clock duly set for 40 minutes). Bedding had been washed and was airing on the new radiator hangers - bedroom window ajar to cope with any condensation.

Eventually the sun came out and I thought about moving the washed duvet cover outside. Instead, it was attached to the patio door curtain rail by pegs, it dried by mid afternoon on this south facing window.

Trying to use the last bit of out of date dehydrated strawberry powder, some small strawberry sponge cakes were duly made, after the bread had been cooked: 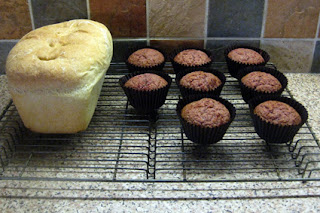 For tea we had a tiny piece of liver, mixed with a small sliced pork steak and mushrooms, with carrot mash and gravy - yum.
Posted by Dc at 08:58