A baptism of fire and a couple of pictures...

We had just left for a longish walk Friday evening when black clouds rolled in. Thunder and fork lightening followed rapidly, directly overhead. Then hailstones followed by heavy rain.

Ruby jumped when the hailstones hit her as she could obviously feel them (as could we). Neither the lightening nor thunder seemed to bother her. We took shelter under a small conifer tree, during the heaviest part of the storm, before decided we were all so wet and cold it didn't really matter.

It took two towels to dry off Ruby mainly because she kept trying to eat them as well as play with them, so we both dried her as we were cold and wet.

She fell asleep by our feet, as close to us as possible. She wasn't shivering but I think wanted our warmth anyhow. Her coat is lovely and soft now.

I thought I would show some more pictures of my grand dogs. First, Miss M. on the left, Ruby's mum with her shadow Mr. L. In the background almost hidden from view is possibly Miss S: 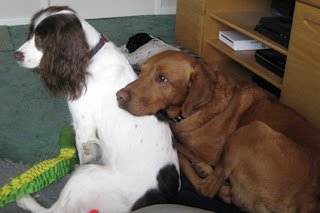 This picture of Ruby was taken when DB had received some mail from DS. She loves to tear boxes up - it was everywhere: 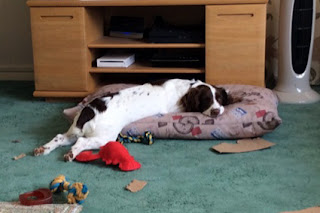 Ruby has now finished puppy training and socialisation classes and moved up to intermediate training. Boy, we were all brain dead at the end of that. Some of the training session this time was of us all moving at the same time, weaving in and out, sitting, fetching, laying down and waiting etc. It was great fun especially when some people switched off and got completely lost and ended up in the wrong place.

Email ThisBlogThis!Share to TwitterShare to FacebookShare to Pinterest
Labels: Ruby