First of all, well done to Andy Murray for winning his first grand slam match at the US Open. He struggled at times but won in the end.

At the start of the season, my fruit trees were covered in blossom and set many fruit. I put up my apple codling moth trap and left the trees to it. In June, they dropped a huge amount of fruit, probably due to our 50 days without rain and very high temperatures.

The Cox apple had 20 left on it. A few more dropped off leaving 16, a good harvest for us I thought. Nope!

The wasps arrived in their droves, the fruits were too immature to pick, the codling moth trap didn't lure them all in and there was damage from those as well.

4, just 4 survived and had to be picked slightly early before their true colour developed. They should be juicy and sweet but being early, are slightly tart. We have eaten two and are enjoying them anyway: 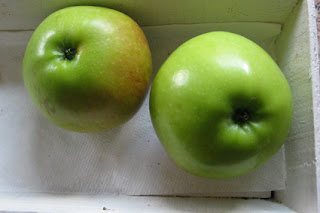 Hopefully next year will be better. I'm just hoping the wasps won't find my few greengages but I bet they do!
Posted by Dc at 06:48

Email ThisBlogThis!Share to TwitterShare to FacebookShare to Pinterest
Labels: Harvesting