I don't know about you but I think the wasps are very bad this year. We must have a nest somewhere nearby as we were inundated with dozens of 1cm long baby wasps a month ago. So far though, not many of the larger French wasps are around.

Getting fed up with not being able to sit outside for long (and eating was impossible), we bought a bottle of cheap beer and decanted it into an old yoghurt pot: 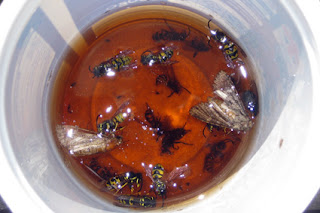 This was just one day and night, should have covered it to prevent the moths getting in:( Anyhow, one wasp and one moth were still alive so I got them out before throwing their mates down the drain. It has now been refilled.

They are still a bit of a nuisance but not as much as before. If you don’t want to kill them, place some honey on a saucer away from where you sit, should help. This is what we normally do but we have so many this year I have had to use this method for a short burst.