Our meat ration for 2 adults for one week would now equate to £7.46, excluding ham or bacon, see War Diary Rations page. 1/7th of this would have had to be taken in corned beef and/or Spam, equating to £1.80 for us both, leaving £5.76 for the week. I doubt we would even use that now.

The meat and onion were slowly simmered for 1 1/2 hours before the diced carrot was added. 10 minutes later the diced potato went in. When everything was cooked, it was strained, saving the juices for gravy.

The mixture was divided between two dishes and a handful of peas and sweetcorn added to both (around 10p) along with 1/2 a ladle of thickened gravy: 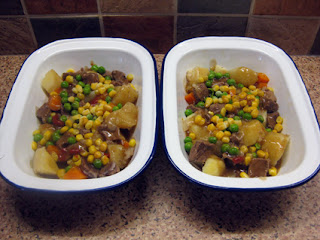 This brings the total at the moment to £3.07. One was covered and added to the freezer. The other in the war (would have had its topping put on and cooked to eat the same day if fuel was short which it often was).

Pastry could be added, or scones to make a savoury cobbler. We will share one, once topped, for our main meal. The other, including saved gravy, will be thawed, have a topping put on and eaten another day.

So then, without the topping each dish cost £1.53 ish for two adults. Half each of this, with a topping, will fill us.