Through the front window...

It looks more like late September early October in my front garden: 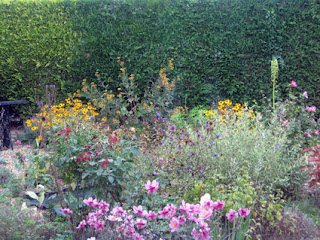 Everything arrived early and is finishing earlier than usual. It is full of weeds as I just can't remember to get out there and do it with Ruby being around.

She can't go out there as it is not secure for her and we have a few roads around us. Also, some of the more dangerous plants for her, have been moved from the back into the front garden, so another reason not to have her around in there.

Whilst she is sleeping, we both try to either get on with jobs which would be slower were she around our feet, or else, just sit and have some down time!