Trialling a new to me roast...

I have noticed on blogland a few people trying the Hairy Bikers Stuffed Pork Fillet (tenderloin) and thought we would give it a go. Recipe here.

We used just one fillet to try it (and half the stuffing). I think the stuffing took the longest bit to prepare: 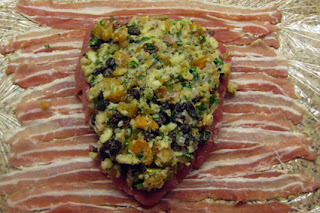 It was made on Saturday, wrapped in pancetta slices as that was all I had and stored in the fridge to settle into shape: 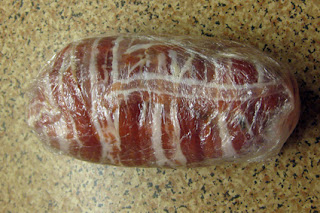 Roasted at 200C for just 50 minutes, rested for 15 whilst I finished off everything else: 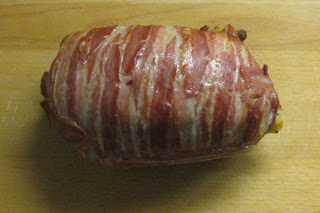 Verdict: very nice and it will be our roast for Christmas Day. We got 12 slices from it and served up 4 meals: 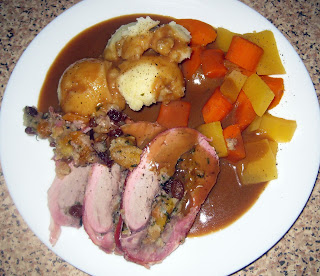 Changes we will make for the day - reduce the preserved ginger a little and use only half the lemon as we found it a little too lemony for our tastes. I didn't have an apple so substituted a pear, which worked fine but we will use an apple on the day.

We didn't serve it with the sauce, instead using the juices to make normal pork gravy. It was slightly lacking until I add a tablespoon of ginger syrup and then it was on another level altogether!