Three out of the four raised beds out back, had spring planting put in them to help maintain the soil over winter. They are now in bloom. In the middle of each bed is their compost bin, all of which are awake and in action:

Bed 1 and a vegetable bed: 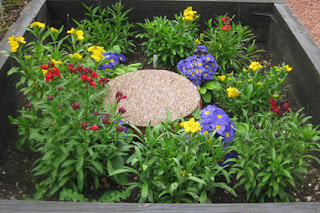 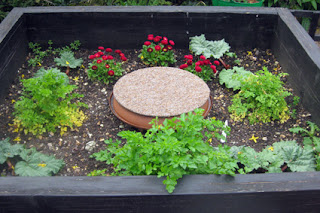 Bed 3 isn't shown as it just has strawberries in it. Bed 4 the other vegetable bed, on the patio: 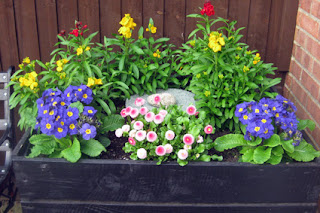 Greengage blossom - excuse the state of the fence. It is NOT ours and the neighbour changed the other half but not this half:( 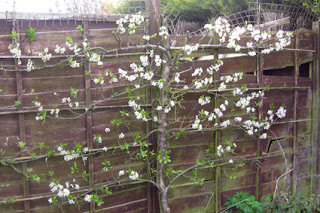 The later fruiting Spartan, which I was told would take 7 years to produce a good crop of flowers, and it has: 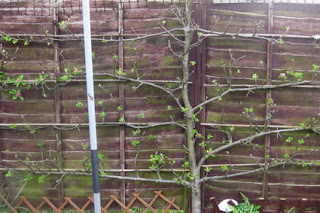 The James Grieve apples are also beginning to send out flowers: 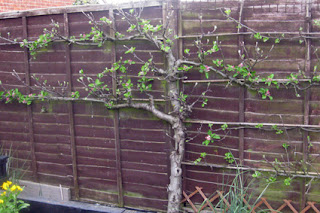 The front arch has in bloom (here on the back of the arch) a russet apple and pink pear: 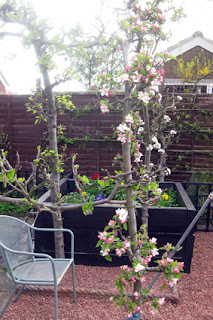 The front apple (out of shot) and another pear which has never flowered, grow on the left.

We also have a back arch with two different plums - Victoria and Czar on one side and a quince on the other.

In the fruit cage are one blackcurrant, one bramble, two blueberries, two gooseberries and two new dwarf raspberries. The blueberries are slowly dying as we don't have the correct soil but have given us fruit for quite a few years. I think possibly this year, I may need to replace them.
Posted by Dc at 08:54