We wanted a piece of furniture that can double up. Firstly as an indoor kennel for Ruby. When she is no longer around and providing it is in good condition, it can revert to a cupboard. We would fit a shelf and maybe use baskets in that phase of its life.

We hadn't put the front wire bits in yet and the handles were removed to get it indoors but you can see the jist of it here: 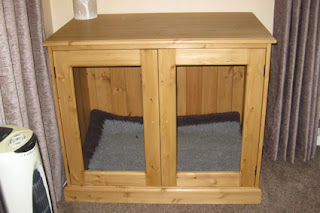 The maker was willing to fit whatever we chose to use into the cupboard doors but we declined, mainly because we hadn't made our minds up yet. We will use something we already have lying around.

We drove over to an oak and pine parlour in a village called Pott Row, outside King's Lynn to explain what we wanted doing. We have used them before for cupboards and tables. They were a bit non-plussed to begin with. We could have had drawers above the doors but wanted just doors. It is a little taller than I expected but other than that, it is perfect.


Anyway, it is about 1/3rd to half the price of top quality ready made version and we are very pleased with it.

We put her normal crate in front of it last evening and opened the other door into it - for security. She hated it, despite nibbles being put into it. Anyhow, come bedtime, she went to bed, stood in her crate and sniffed into the cupboard then went in. She padded around and lay down. This morning, she was still in the cupboard - success!

The doors are now finished and she has a better matching cushion cover: 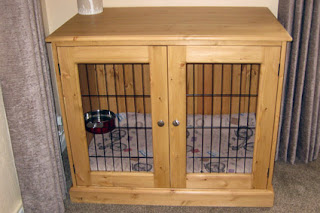 When she came home as a puppy, we had 4 parts of a 6 sided cage as a toileting area, attached to her crate. One of these sides was utilised for the doors. Two chrome handles, in a tin in the garage, have been put on, as has her water bowl.
Posted by Dc at 09:39