Came round the other night to give us about 2lb of brambles (blackberries). He sometimes gives us things when he has them to spare from his allotment.

Anyhow, I used them, along with windfall eating apples and pears, about 6oz of elderberries from last autumn, sugar, lemon juice, a little water and 1/2 teaspoon mixed spice, to make some windfall/hedgerow jam. I shall give him a jar as a thankyou.


Herewith the jam although it will probably look just black in the jars: 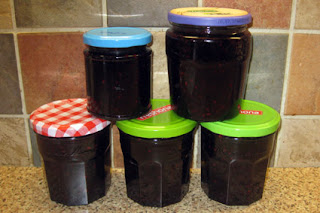 I know it will taste delicious, especially in the depths of winter and he loves jam or anything homemade for that matter.

Although the bed still has its summer quilt on, it now also needs the addition of a little thin topper just to stave off the night time chill. Flannelette sheets have been bought ready for the colder nights and I think they might be getting put on sooner rather than later.