As we hadn't been over there for a long while, this was where we took Ruby yesterday. She had a lovely run and paddle. We had chips and curry sauce, followed by an ice cream, whilst she has her dried chew.  We were looking for a bakery and finally found one on the high street called Mr. Bun.

They sell a wide variety of savoury and sweet items, alongside bread. The Viennese whirl (or finger in this case), cost £1.50 and was huge. It is shown alongside kitchen scissors. 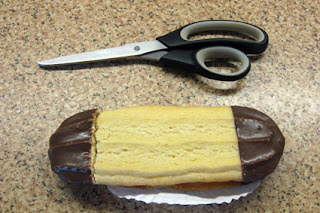 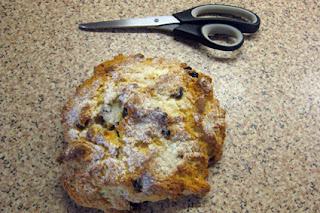 Although we didn't buy one, they also sold lots of fresh cream cakes. A chocolate eclair, the same size as the finger above, was £2.50. Iced buns were the same size and just £1.00!

Only one thing marred our visit and that was a lady who walked behind us and said "you ought to be kinder to your dog", loud enough for me to hear. I turned and gave her a long stare. We had just pulled Ruby into heel as she was generally pulling and messing about. Not roughly but firmly. Her tail was still firmly wagging but obviously, she didn't notice that.

It was all I could do to not march up to her and give her what for. An autumn postcard has been added to my cardmaking tab.
Posted by Dc at 01:07