Whilst I couldn't be vegan - update

I have been experimenting recently with a few vegan meals. We also eat primarily vegetarian, or plant based meals about 70% of the time.

So then, what vegan things have I tried? Breakfast for a start. Five days a week, I have a fruit smoothie, using two pieces of fruit, various seeds and normally cow's milk. This has now been changed to almond milk. Hardly any difference in taste so that's a bonus.

Last week we tried soya bolagnaise/chilli using soya mince. I left it to soak for too long after misreading the instructions but here it is after soaking: 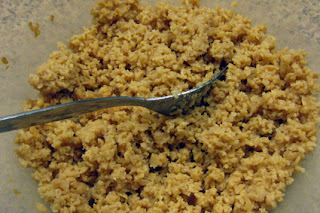 After that stage, I cooked it as per a normal meat version but using everything vegetarian. We wanted spag bol but it really didn't have much flavour so added red kidney beans, chilli, cocoa and extra tomato puree: 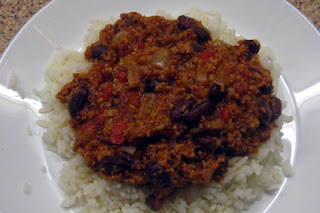 This made it edible and quite nice but we are not sure we would repeat it. We often have a vetagrian version anyway and would probably stick to that.

So far, that is as far as my trials have gone. Watch this space!

Here is a link to carbon footprints of our food - here.
Posted by Dc at 08:56