We watched Andy play his only round in Montpellier. First set was very good. He got broken but broke back staright away. It went to a tie break and each of them had 3 chances to take the set. Unfortunately, his third attempt, on an empty court, he put the ball just too long. His movement was very good. First serve was terrible, just 43%, something he will have to improve on somehow.

Obviously tweaked his back early on in the second set as he was wincing after certain moves and lost 6 - 1. First set though was a vast improvement on his challenger event so hope yet.

Yesterday, we were busy outside, digging the LHS of the fruit cage. All the plants were dug up, 3 bags of manure put down, then things replanted. We now have the 3 dwarf raspberries together with a rhubarb at the end. It of course doesn't need to be in there but we have nowhere else to put it: 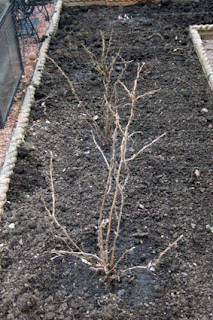 There is just room at the end of the path to put in something else, don't know what yet. Also, my newly acquired apline strawberries have yet to be put in. Getting there at last!