We have noticed that the soil level in the fruit cage was diminishing for some reason. When it rained, we had large puddles forming and some of the fruit plants were sitting in sumps. Now, some of that is due to the ground itself, as we have a thin layer of clay about 18" down. Generally though, it has always been okay.

Having bought far too many bags of manure when we created our new border at the back of the garden, we covered them for winter protection.

Finally, we were able to get started. The two gooseberries and one raspberry were dug out on the RHS of the cage. The bramble stayed put. 4 bags of manure were added, dug in and the gooseberries replaced. The raspberry was temporarily put in on the LHS: 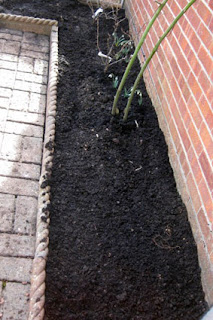 The soil is only about 1" or 1 1/2" deeper but it is better. Rather than raise the path, we utilised edge tiles from other parts of the garden to form a barrier to stop the new soil falling onto the path. At the end of the path were a few snowdrops, these were moved to this side. 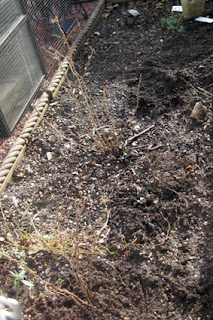 This space has 3 raspberry plants and a rhubarb. We will lift, add manure, dig in and replant. Our order came yesterday. The two gooseberries have gone down the RHS of the fruit cage: 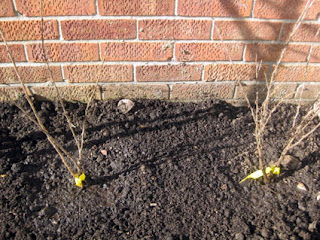 The crab apple tree 'Laura' has gone into the back border: 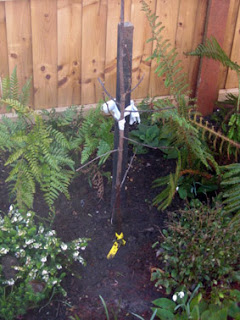 Hopefully they will thrive!