These things are all over the internet at the moment, due to being a protein based rather than carbohydrate based flatbread. We tried them one day and found them tedious to say the least. They do not behave in any shape or form like a pancake and take an age to cook.

After the awful first attempt, I made another batch up this time adding things.

I initially used 1/2 cup of split red lentils soaked in 1 cup of water for 3 hours. Once soaked I needed to add some more water in order to whizz the concoction into a liquid, maybe another 1/4 - 1/2 a cup or so. I used my stick blender to transform it.

Here is where I added a beaten egg, 1/2 teaspoon of salt and 1/4 teaspoon black pepper. Once that was whizzed up I still needed to add a bit more water to get the consistency of single cream.

The non-stick frying pan was put on and left to get very hot. I added a smidge of coconut oil then swirled in a 1/3 cup of mixture to the pan, creating a small circle as I went. Once this stuff hits the pan it is very difficult to swirl around but I just about managed it.

Now, most importantly, DO NOT TOUCH IT for at least 2-3 minutes before attempting to turn it over. They tear at the drop of a hat but the additon of the egg really helped.

We filled them with sweet chilli humous, salad and tinned tuna: 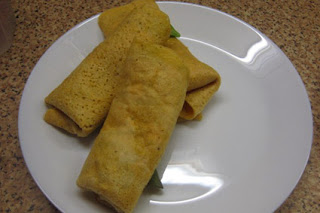 Then added some sliced tomato and apple. Two would have been enough. The recipe makes about 6 and they stay flexible when cold, can be covered and put in the fridge or frozen.