What is the difference?

Initially, they seem to be the same in their growth habit but microgreens are left to grow longer and taller and are eaten when they just begin to form their first pair of true leaves.

I am currently in the process of growing radish microgreens. After one week, they are at this stage: 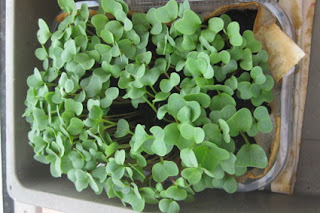 The mereest hint of true leaves, another couple of days I reckon. We both tried one and you can tell they are radish.

I used to sprout things years ago, gave up, but have now taken an interest again. I don't want to keep using compost as apparently, they grow just as well on paper towel, or better still, on a silicone mat which can be reused time and again.

Neither of us are keen on lettuce and tend to want to cover it in dressing which rather defeats the object. However, sprouts and microgreens, being so flavourful, shouldn't require any or very little dressing so hopefully, a win win situation.