I decided to make some Elderflower Cordial this year. Haven't made any for quite a while: 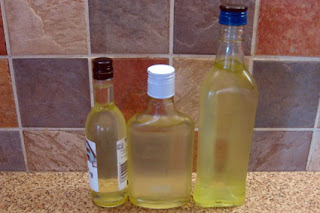 It is crystal clear but looks slightly cloudy on the picture as I removed it from the fridge and it decided to mist up on the outside of the bottles. Just one or two tablespoons in water of your choice to make a refreshing drink. One version of the recipe can be found here,   but I use 2 lemons rather than 2 oranges.

Having found some baby board books, and purchased some Brusho paint pigments, I tried them. The plastic coating on the pages was lightly sanded down before a coat of white gesso was applied. Once dried I sprinkled on some of the powders and used clear gesso to spread them over the surface. Once that was dried, I coated it with pva glue and sprinkled on a bit extra plus white speckles. It is darker than I wanted but hey ho, such are these trials. 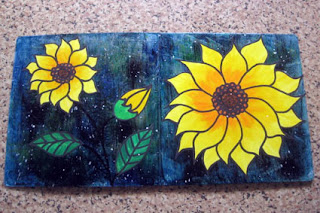 I drew the sunflowers and painted them in gouache paints. Once dried they were outlined in black and glued into place. Not bad for a first attempt but at the moment, I don't have plans to do too much of these for now. I will keep on experimenting though to see what I can come up with. Bleach next, maybe?