Whilst the oven was on and a hard watch!

I baked us an apple, sultana and ground almond pie: 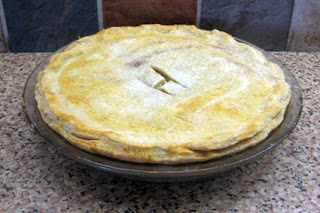 We shared one half between us with custard for a light tea. The other half was eaten yesterday.
Poor Andy was as flat as a pancake yesterday, absolutely no energy. He ate two energy bars and drank 5 special drinks, to no avail. He lost the first set 6-4. Was down second set 5-3 and squeezed a 7-5 win. Better in the third set, managed to get a tie break. Could have won, should have won but lost 8 match points before losing:(
Not on his own though, Dan also lost. Cameron got through though.