Final Tomato Harvest and not such a bargain

As we have been having night temperatures of 4C or 6C, thought it about time we brought in the tomatoes. I don't have a greenhouse and those temperatures are just too cold, poor things: 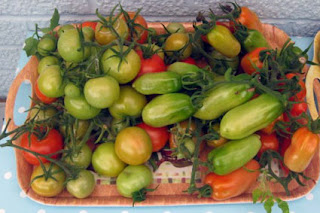 The large tray above, have Shirley and San Marzano plum tomatoes. 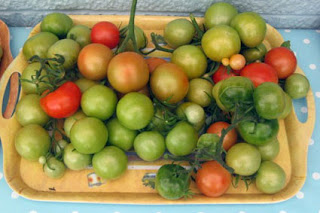 The above are Ailsa Craig.

We also filled up a 4 pint bowl of Ailsa Craig and Gardeners Delight. I shall let as many ripen naturally as possible, then either cook the rest for sauces, or make into chutney.

DB tried the neck shoulder warmer the other night. It is not microwavable:( Turns out, it has a button you press which sets off a chain reaction to heat the gel. It lasted for 60 minutes but once cold, set as hard as a rock!

The instructions said to lay it in a tray ot boiling water for 15 minutes then it will turn back into a gel. Two trays and 4 kettles later, it was still rock hard so it went in the bin. It said it was supposed to be able to be used 1000 times. We were not happy having to boil a full kettle 4 times, not in this day of expensive electricity. Some you win....