Again, this idea was taken from MFT's blog see here
but there are also lots of mentions of it on the internet.

I'm using a 1 litre jar that I used to use for making yoghurt in before I bought a yoghurt maker to replace it. I know, I know, cheaper to use the jar but after a few weeks, it seemed to stop working (although to be fair, it was in the long dark winter we have just had).

Anyway, the idea is to put some chive flowers (after being rinsed and spun in my salad spinner) into this jar, and pour in vinegar. I am using the plain clear stuff that I would normally use for fabric conditioner. The jar until this morning (before the heavens opened) had just one bottle of vinegar in it. After picking more flowers today, I had to top it up.

It is currently one week old and is meant to steep in a dark place for about 3 weeks. I shall leave it for 3 weeks after I put in the last lot of flowers. However, just one week on, it looks like this: 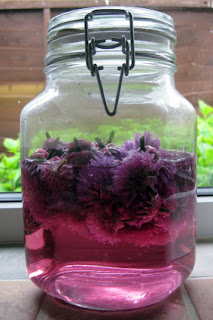 A lovely methylated spirit colour! The smell is similar to pickled onions ...
Posted by Dc at 11:03