Swapping a meal for a dessert

Yesterday, we should have been having chickpeas, tomatoes, spinach and eggs for tea. However, a bought loaf of bread was getting very old and we were worried about it going mouldy so swapped this out for bread and butter pudding. Here it is, fresh from the oven although it sinks down a bit afterwards: 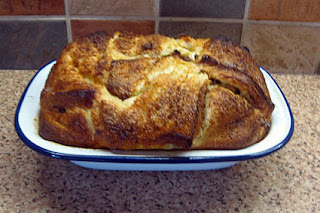 Four slices of buttered bread cut into quarters, with a tablespoon of sultana's and one teaspoon of sugar between each layer (6 quarters in this tin). Therefore that was two layers and 4 quarters leftover for the top. Beat 4 eggs and make up to one pint of liquid with milk. Gently pour over the bread and leave to half soak. Keep gently pushing the bread down into the liquid as it has a tendency to float. Sprinkle the top with sugar and in this case, cinnamon at DB's request. I don't add sultana's to the top layer as they can burn.

It was baked at 190C for about 30 minutes. We had half each with hot custard and it certainly filled us up! When you think about it, it is really just sweetened poached eggs on toast.

I have kept busy vacuum sealing more pantry items to extend their shelf life. Found a YouTube channel yesterday on dehydrating vegetables, very informative so going to take down notes for future use. I loved that she showed the difference between those that are blanched and those that are not as well as carrot slices versus grated carrots and how they rehydrate. See her instructions for carrots here.

Or her blog here.

The new back border has finally had its first weeding and sorting out, thank goodness. I was beginning to think I would never get it done. My first vegetable seedings have been sown direct into the ground and are now showing.

DB has started his annual clearing of the dreaded mare's tail. Eventually we give up and let it grow as it greens the garden where there are bare patches. We do try to keep on top of it in the early weeks!

The ironing has been done and I have a batch of vegetable and cheese soup on the go. DB has gone off to the dentist for his check up.

I divided one 1lb pack of stewing beef and froze half for later use. The other half was put into my slow cooker along with potatoes, carrots, parsnips, swede, onions, pearl barley and chopped apricots.

It slow cooked for 5 hours to make us enough stew for two days and a small amount of gravy to freeze for later use: 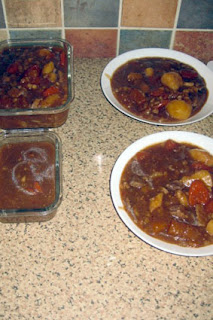 Not the best of pictures but you get the drift. I made some mini cheese scones to serve with it as well as froze some for the other batch of stew.

Our walk this week, takes us through the middle of a farm yard. We were about 20 minutes away when we heard the cows starting to bellow. They almost sounded worried. I was getting a little concerned by the noise, wondering if someone was trying to steal some!

We approach said yard through a field. Sometimes a few cows are in this field and a neighbouring one, with the yard empty. Not so on this occasion. They were mostly out in the yard itself, many dozens of them.

We approached the gate and waited for about 10 minutes, watching them all running about, with the two stockmen trying to round them up. Even they were laughing at them. No way were we going to walk in, which we are allowed to do, as they all had calves.

After about 10 minutes, one of the chaps approached us and asked if we were waiting to go through, we said yes.

He said "Come on then, I'll escort you through. This could take 30 minutes or 5 hours, I suspect today, it will be the latter". We asked what they were trying to do as we knew it was too early for separating the mothers from the calves. He told us they were trying to move them bit by bit to pasture away from the farm, but they wanted to join other cows in the nearby field or go back into the barn.

We got safely through and carried on with our walk. Several fields had their cows and calves in them, always standing by the gates we needed to go through. We could hear the bellowing everywhere they walked but coming from different directions. Sounded like at least some of them had been moved. E was a bit anxious as she isn't too fond of cows but we managed in the end.

After having our bathroom window changed, we found out we had made a mistake in our choice of glass. The one we chose turns out to have an effect of a lighthouse lens. We tend to bathe early evening when the sun is round that side of our home. Consequently, we get blinded and it is very difficult to relax.

Another perfect fit blind in metal slats with a maple effect: 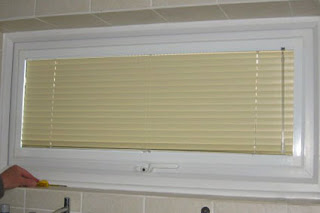 It looks creamy yellow here but has a light woodgrain effect. Makes a huge difference.

Stinging nettles that is. I used half of my supply over winter and thought it best to top up. Gathering the nettles in spring appears to be the best time: 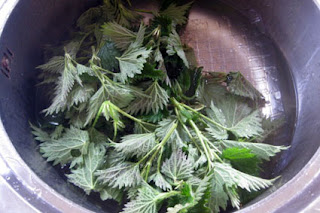 Once washed, leaves stripped from stalks and patted dry, they are put into the dehydrator. I did a total of 8 trays, lightly squished them and put them in a preserving jar. To use, they are put into a small herb blender and turned into powder which I sprinkle on my morning yogurt/cereal etc. Yes, you need to wear thick gloves, I find washing up gloves ideal. They can also be used to make nettle tea, which at the moment, I don't drink.

My mojo has returned but I still have to pace myself. Even after just 20 minutes doing something as simple as weeding, I get breathless and am pooped for hours afterwards. Still, onwards and upwards.

Flour from the freezer and pantry - done!

Pasta and rice from the pantry - done!

Things back in the freezer and pantry - done! 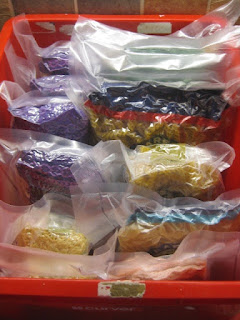 Doesn't look a lot but the rest is in the freezer. Buying more flour tomorrow and more beans etc., next week. Remember folks, two is one and one is none!

I went for a short walk with DB and Ruby to our woods on Saturday to gather pine cones. We got just one carrier bag, more later in the year: 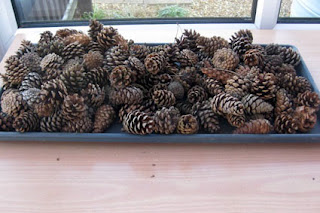 The tray they are drying out on measures 2' x 1' (60cm x 30cm). Once dry they will be stored away. They make excellent kindling, saving a bit of kindling wood and newspaper. Also, if the fire has burned down too much, you can revive it with them.

Bending up and down didn't do me much good however. On the way back, Ruby ran off into a deep ditch full of sticky black mud. We know from experience it is difficult to remove. Anyhow, once home, she was hosed down, shampooed, hosed, shampooed and finally hosed again. She was as clean as she was going to get.

I came indoors and had to sit down. my pulse was 110 and my oxygen levels had dropped to 95. Nothing too precarious but I was shaking and felt dreadful. Same thing happened Sunday morning, bending over to wash my hair.

I am still tired and the dreaded green catarrh is also making a bit of a comeback so I shall have to start treating that again. Blimey, when will it end!

Here it is in its box: 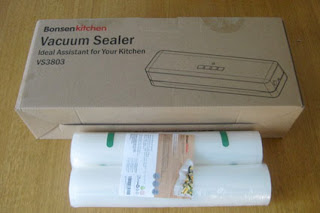 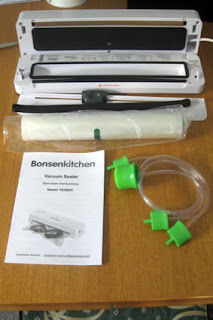 A dry/moist mode, vacuum and seal or just seal, can be used for cooking in Sous Vide mode (nope) and comes with one roll of bags. As you can see, I also got another twin roll pack.

Any bags of beans, rice, pasta I want to do, will have small holes put into the tops of their original bags before being put into one of these and sealed. At the end of the year, I hope to remember to do the same to any vegetable/fruit/flower seeds I have left or self harvest.

I am also investing only in heritage seeds as they should come true from self harvested seeds. A lot of modern seeds can't be saved like this. You can sow them (apart from F1 hybrids) but they won't come true to their original.

And a week on from my last post, I am getting better. Still have a mild sore throat and occasional catarrh/cough. My energy levels are not fully recovered and I feel quite dehydrated. Still, its better than one week ago, onwards and upwards. Thank you for all your kind wishes.

One load of washing on the line and another on the go. It is a sunny, cold but blustery day, so I hope they will at least get half dry.

I have invested in a vacuum sealer machine. We had one when we came back from Germany decades ago but couldn't get hold of the bags as they weren't 'a thing' over here then. I want to store my bags of flour, pasta, rice, beans etc longer term so the air needs sucking out. I won't be using oxygen absorbers for now as they won't be for super long storage.

More on that another time.