For tea last night, we had the first chicken and vegetable cobbler as mentioned on a previous post.


The sauce was a little thin so was thickened more, but it tasted lovely. As I had divided the base amount into two metal dishes (each around 9” long at the top) I made 1 1/2 times the cobbler recipes. 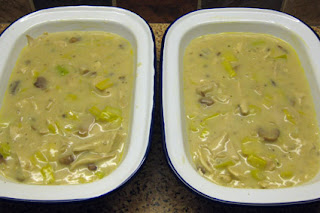 6 circles of scone mix were use to top one of the dishes. 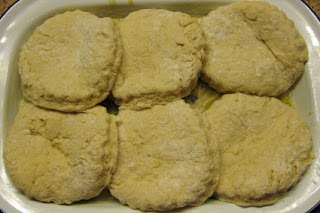 The left over amount was laid on top of baking parchment so they would soak up the base mix whilst in the freezer. 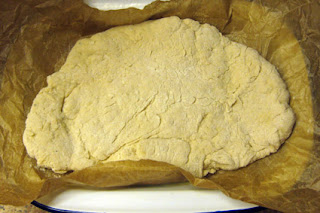 What would I change? Well, we found the cobbler topping too much. As the base is quite nice I might leave it as it was (before I thickened it more) and use one half to make a lasagne. The second bit I would top with mashed potatoes or mashed potatoes and vegetables.

Anyway, here it is served up, certainly filled us up! I do apologise for the strange look of my posts. There aren't large gaps everywhere when I'm writing. 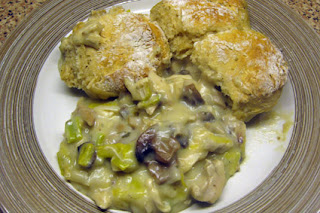 Our chicken and vegetable soup was duly made and the first batch enjoyed. 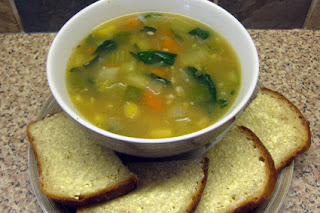 I had missed the birthday of the DB of a friend of mine (70) and decided to make up some bags of cookie mix to give him one (with an apology).


Having never made this before, had to try it out. They were very good. 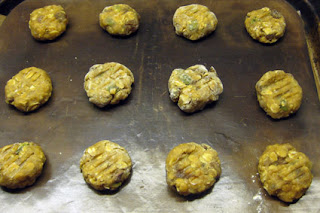 Forgot to take a photograph of them on the cooling try so here they are in the tin! 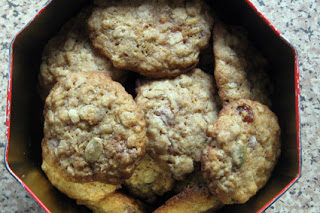 These were made from one bag of the mixture and I managed to get 30 cookies. The recipe for these can be found here

I didn't have enough chocolate chips but they still came out okay. At the moment I'm making our weekly two loaves of bread. After lunch, will attempt to make the chicken and vegetable cobbler previously mentioned.
Posted by Dc at 10:17 2 comments:

Welcome to my two new followers, Oh Pioneer and Beyond Astral Skies. Glad to have you aboard the Norfolk express!

I don't know about you but if I get pestered by charities I tend to run in the opposite direction. We always give to the poppy appeal and DB supports the Vulcan to the Sky project.

I normally don't make New Year resolutions but this year decided to make one. Every month, I will give to a charity of my choice, a one off donation. It will be by cheque and although they will know my name, they will not get my address.

Programmes that show some charities at work interest me greatly. Last year, I watched a programme on how some of our surgeons (plus those of other countries) donate their time freely to perform sight saving operations on people around the world. In honour of their dedication, this is my first chosen charity. A link to it can be found here, should you be interested.

I have already decided on the 12 I shall give to. They are close to my heart, and may or may not have been/are, relevant to loved ones. (this is a hint to not inundate me with your charities :0).

Judicious saving will enable me to do this. It is something I have thought about doing for years but never gotten around to. This is the year!
Posted by Dc at 09:45 11 comments:

Email ThisBlogThis!Share to TwitterShare to FacebookShare to Pinterest
Labels: Giving

Getting back into the swing of things...

It was weigh day today and we are pleased to report DB has lost 3 lbs and myself 1lb from our Christmas extras, simply by getting back into our normal eating routine!

Yesterday, I found a whole chicken breast quarter in the freezer, suffering from slight freezer burn. It was roasted and had most of the meat picked off. Whilst it was roasting it was accompanied by a large pan of potatoes, then followed by 2 baked apples stuffed with home made mincemeat.

We had the chicken, plus some of the potatoes, stuffing, broad beans, runner beans (from the garden in our short summer!), peas and gravy. Half of the apples were eaten with custard.

The remains of the chicken breast 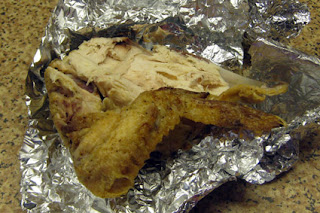 were striped from the bones and with the outer part of an onion, were boiled for 10 minutes to give me a base stock. They were then discarded.

I added the following diced vegetables: a whole thick slice of swede, 4 medium carrots, the onion, an old pepper, plus 2oz of pearl barley. They were simmered for 40 minutes. Then the chicken pieces and a tin of chopped tomatoes, one of chickpeas and two chicken stock cubes were added. 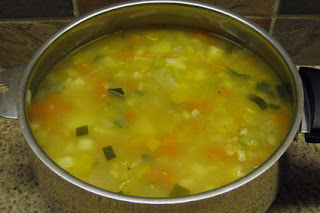 the whole lot was blitzed with a stick blender, a generous helping of grated Parmesan was added. DB put a generous blob of chilli sauce in the bottom of each bowl. We had 4 ladles each plus 1 1/2 slices of home made bread. 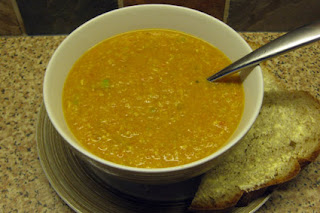 There was enough left over for the same tomorrow lunch time. Another 3 ladles were put into a separate container to have more bits and pieces added, to be served with pasta for tea tomorrow.

The left over roast potatoes are for tea tonight along with a grilled bratwurst and grilled tomatoes. That will be followed by the remains of the stuffed apples and some freshly made birds custard!
Posted by Dc at 14:00 4 comments:

Thought I'd leave family history mysteries for a while as it quite literally is keeping me awake at night.

I was very pleased to receive for Christmas, the book 'Down to Earth' by Rhonda Hetzel. Such a mine of useful information. Many things we practise but it is always good to find new things to have a go at.

I have I think, a subconscious fear of not being able to do the everyday things my husband does, should he die before me. Now that's not a very cheery thought for the start of the year but it is something we have discussed from time to time. No reason why it should happen that way around but we decided to tackle my fears.

Last year saw us sorting out wills, funeral plans, life insurance etc. He normally does the bill/accounts for us on his computer. I have always known how to go into the program to see how we are doing financially but didn't understand the programme itself.

So this year, it is my turn. Every time money is spent, or standing orders/direct debits go from our current account etc, it is up to me to clear those transactions, double check on line and make sure both balances are the same. I am slowly learning how to put these transactions in, transfer money from one account to the other etc.

So far it is going okay and hopefully, I will be as expert as him by the end of the year.

A few days ago, we received our estimated water metre bill. It seemed quite high to me for 11 weeks, so mumbling under my breath I got a screwdriver, kneeling pad (it was raining), glasses, pen and paper (oh the joys of changing eyesight as you grow older – such fun).

My neighbours must have wondered what I was up to but after three attempts, the blasted lid finally came up and peering down into the depths, constantly wiping the rain of the metre window, I got my reading.

They had estimated we had used 23 cubic metres in 11 weeks. In fact it was 15. I know I should have remonstrated with them but I left that to him. It took nearly 5 minutes of waiting for a human before we got it sorted out. End result was that the bill was 2/3rd of what they estimated.

Before we had the metre fitted in June 2011, we were being charged £57 per month (over 10 months) for unlimited water/sewage removal. So, 6 months at that rate would be £285. The same period of metered water equates to £108.41 – quite a difference.

From the cubic metre point of view, we would qualify for the So-Low rate but are holding back for now in case we go up in the last 6 months of this current year. We can change any time we want. The So-Low rate doesn't have a standing charge but charges more per cubic metre.

There you go folks, just a glimpse into our world of dealing with bills. Who does yours? If its not you, have you thought about taking it on for a while so you know how to do things for yourself?
Posted by Dc at 13:11 6 comments: