As we are all aware, late summer early autumn days can be either hot or cold in this country. At the moment, the later is true. On these cool (often cold, wet and windy days), the kitchen is the room I love to be in. Preserving, making, baking, all are ways of keeping warm without resorting to central heating or fires. Not only that, the delightful aroma only adds to the sensation of warmth and comfort!

As is often the case, the weather has turned and our outdoor tomatoes are either all ripening at once, or sulking. If it gets much colder at night (and some nights are predicted only 6C in the towns and cities, a lot colder here in the countryside), then they will be adversely affected both in growth, maturity and taste.

My new garden bed down near the garage has been very productive. Only 3lb of mixed beans so far but more to come (hopefully). The tomatillo's are quickly filling their husks but may need harvesting before then due to the cold. The baby bambino tomatoes have done amazingly well, 7lbs so far and loads more to come - again hopefully!

Having such a vast supply filling bowls in the kitchen and fridge, I decided to partially dry and freeze some.

They were cut in half, and had salt and lashings of pepper applied. 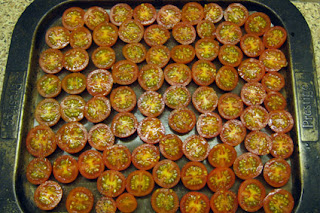 They were 'roasted' in a cool oven - 100 - 120C, for 2 hours. Not enough to fully cook them but it helped drive out some of the moisture.You can tell this by the gaps in the tomatoes. 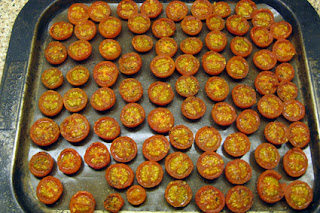 They were allowed to cool on the tray then still on it, were open frozen for 2 hours. After that they were packed into a freezer bag, still remaining individual half tomatoes. I'm hoping this will provide us with a touch of summer in the long cold winter months. I think they will work fine in stews, casseroles or other things served with pasta.

Some bread was also made 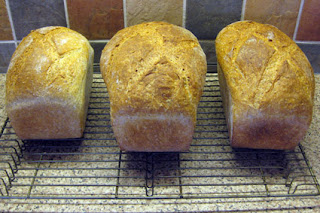 The slightly smaller loaf on the left was a thank you to a neighbour who kept an eye on our garden whilst we were away. Also made some granola, this time with marmalade and honey as the sweetening agent. 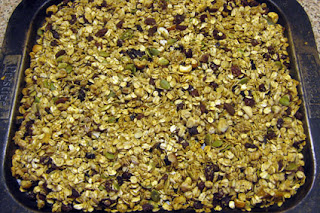 In amongst the tomatoes picked for roasting, was this cheeky little chappy. 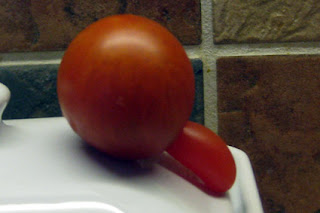 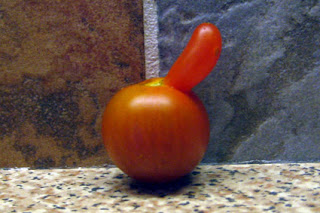