First of all, welcome to my new follower the womble.

Another autumn day finds me in the kitchen once again. This time, making a Green Tomato and Apple Pie courtesy of here

There are many recipes on the internet for this but thought I would give this one a try as I have used many of their recipes before. I did cut down the sugar though as 1/2lb, using sweet apples, would have been too much. With hindsight, I would use 170 - 180C rather than the stated 200C, as 50 - 60 minutes at that temperature, the pie most certainly would have burnt if I had left it in for that long!

Anyway, herewith some photographs as I was making it.  The tomatoes are meant to be skinned but although I have success using the hot water method to skin ripe tomatoes, it didn't work with green and I had to use a peeler - very fiddly!

This is after slicing and adding all ingredients except the butter. 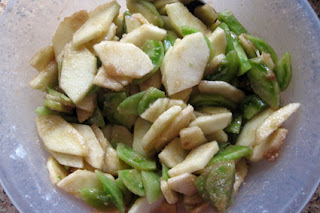 Here is everything, except the butter, on top of the base pie crust. You can see by the shiny appearance that more juice is coming out. 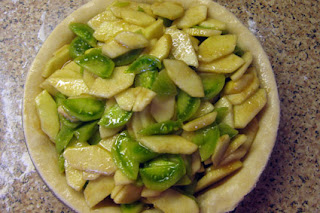 Once filled, this was the spare juice. Again, with hindsight, I think it all should be left to drip for longer to get as much juice out as possible. It might even be worth salting the tomatoes overnight to dry out their juices BUT I have no idea if doing so, whether it would make them more chewy or not. 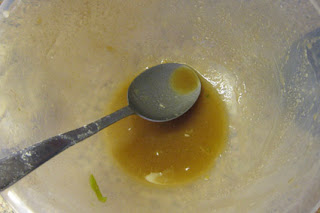 I used some of the left over juice on the top crust. 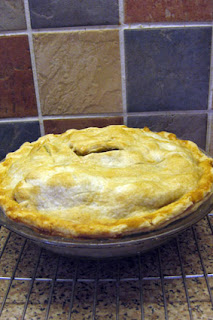 Here it is after baking for 40 minutes at 190C - my choice as it was browning a little too quick. There was more juice in the bottom despite adding the requisite flour to help soak it up - but it was more sauce like. I really don't think it was cooked for long enough as there is still quite a bite to the tomatoes.

Anyway, we had a quarter each with custard for our lunch! 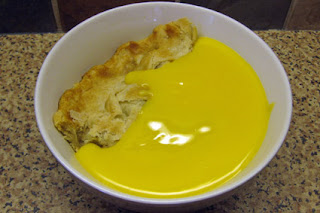 Would I make it again. I don't think so. To me it seems a waste of good quality eating apples. Both those and the tomatoes were chewy, not a texture we like in apple pies. So in retrospect, I'll stick to the British apple pie and use my green tomatoes up in something else!

Anyway, we had a little left over pastry and managed with a couple of re-rolls, to make 9 jam tarts which were filled with home made gooseberry and blackcurrant jam. 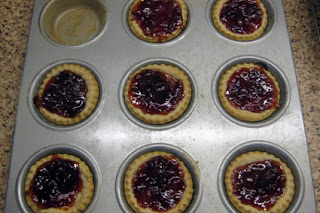