Part of future proofing (prepping) my pantry, is to try new things that store well. We don't seem to have much really good quality canned meat to chose from but I had heard about Marks & Spencer chunky chicken in a cream sauce. At £3.50 for a 375g can, it isn't cheap but we were hoping it would be nicer than far cheaper versions we had tried and disliked. I am very fussy with meat and we won't be buying any minced anything! There were enough chunks for us both, equating to one really good sized breast: 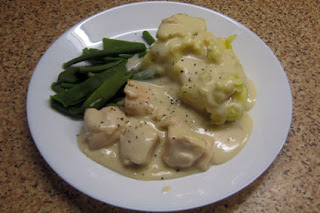 I did add a pinch of dried tarragon and it was served with mashed potatoes and green beans from our garden. We both gave it 8/10. You could drain it and make a small pie, reserving the liquid for gravy. You could maybe adding something else to eek it out, such as chopped ham or mushrooms.

For an emergency meal it would be great. I had just frozen some meat, completely forgetting to keep something back for lunch so it came in handy.