Pumpkin Tart but not as you know it!

It must be quite a few years since we had Pumpkin Tart so the other day, decided to make one. I didn't have a pumpkin per se but did have a Butternut Squash so used that instead. I follow the recipe given to me by a friend but trying to cut down the calories a little, decided to make it without the pastry!

Juice and zest of 2 lemons
7oz (was 8oz) castor or granulated white sugar (you could change this for brown if you wish)
4oz sultana's - (we don't think they are really necessary)
1/2 teaspoon each of ginger, cinnamon and nutmeg
2 eggs
1 tablespoon sweet sherry or marsala wine

Mix everything together in a mixing bowl. It will be very runny at this stage but don't worry.

As it was so long since it was last made, I panicked a bit and added 1oz ground almonds but wouldn't do so again as it made it too thick!

Very lightly grease a casserole dish - you will have to judge by how much mixture there is to what size dish you need, and pour in the mixture.

If making in a pastry shell, I have done it in a Victoria sandwich cake tin and a 9" flan tin.

Here it is both before and after baking: 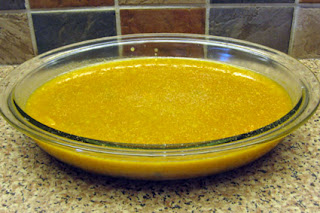 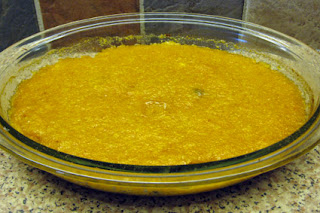 The sultana's have a tendency to sink. It tastes like a lemony, spiced egg custard with a similar consistency.

Whilst the oven was on for that, I made some soda bread and decided to bake it in a loaf tin, so we could use the slicer - crumbled a little but sliced reasonably well: 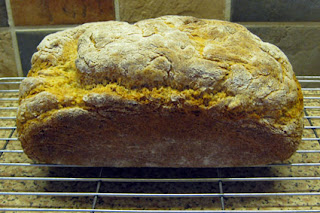 Despite what all the books tell you, we find soda bread can last 3 - 4 days as long as it is put in a plastic bag, which has been lightly tied. It is good for sandwiches on the first da. After that, it is best used as toast.